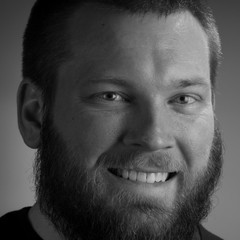 Adam Groh, a native of St. Louis, Missouri, is a percussionist with a diverse performing and teaching background. He is an ardent supporter of new solo and chamber music for percussion, and has commissioned and premiered works by composers such as Mark Mellits, Jason Treuting, Ian Dicke, Ethan Frederick Greene, Clif Walker, Eli Fieldsteel, Christopher Cerrone, Brian Nozny, and Chris Ozley, amongst others. He has recently been invited to perform at the Bang on a Can Summer Festival at MASS MoCA, the Banff Centre for the Arts in Banff, Canada, Fast Forward Austin, the Percussive Arts Society International Convention, SEAMUS, and Electronic Music Midwest. As an active chamber musician, Adam has performed alongside So Percussion, members of the Bang on a Can All-Stars, and with the Austin Chamber Music Center. He was also a featured performer with the Denkyem Percussion Group in the "Promising Artists of the 21st Century" festival hosted by the North American Cultural Center, Costa Rica.

Adam has performed with the Des Moines, Round Rock, Victoria, Tallahassee, Chautauqua, and Northwest Florida Symphony Orchestras. Adam has also performed in the Ringling International Arts Festival under the baton of Maestro Robert Spano. Also a passionate educator, Adam has presented clinics at events such as The Midwest Clinic, the Texas, Kansas, Minnesota, and Iowa Music Educators Association Conventions, and multiple PAS-sponsored Days of Percussion.

Adam has had articles published in both Percussive Notes, the official research journal of the Percussive Arts Society, and Rhythm! Scene, and he also served as a Contributing Editor to DrumChattr, an online resource for percussionists, where he wrote a weekly column. Currently, Adam serves on the Contest and Audition Procedures Committee for the Percussive Arts Society, and previously served as the President of the Iowa PAS Chapter.