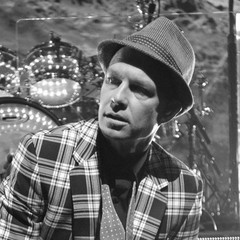 Adrian was born in Long Beach, California and exposed to rock music very early by his hippie parents. He became a fan of the band No Doubt from the start, attending their concerts after they formed in 1987. The same year he began playing the drums. In 1989, No Doubt announced that they were looking for a new drummer, and Young auditioned. He got the position, joining the band in time to be heard on their first hit albums, No Doubt- Self titled. At the audition, he lied and said he had been playing for six years.

He is also a regular fill in drummer for The Vandals. No Doubt have played with The Vandals many times. The Vandals song Oi To The World, later went on to be re-recorded by No Doubt, and go on to become the Vandals' only Gold record.

When not performing and touring, Adrian likes to spend his time out on the golf courses-- as he is a serious, avid golf player.