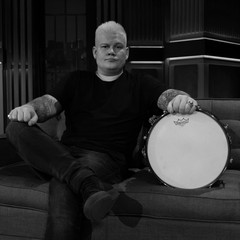 Aleksandr Potapov, was born on December 21, 1987 in the town of Kotelnich, Kirov Oblast, Russia.  In 1995 he won admission to the town children's music school majoring in xylophone. While attending, he participated in local and interregional competitions for which he won an award for numerous times.

In 2002 he studied at Kirov oblast School of Arts (xylophone). From 2002 to 2006 he was the soloist of Vyatsk orchestra of folk instruments named after Shalyapin. At the same time, from 2003 to 2006, he was also a member of Vyatsk symphonic orchestra headed by V. Raevsky. Since 2006 he studied in the faculty of Music, Variety Art and Artistic Communication (majoring in percussion instruments) of the St. Petersburg State University of Art and Culture, which he successfully graduated from in 2011.

Starting from 2006 till present Aleksandr Potapov collaborates with famous musicians from all around the world and also participates in various jazz festivals.

“Remo is the best drumheads for me!”  -Aleksandr Potapov