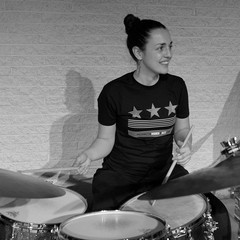 Ana Barreiro is an active drummer in the Los Angeles Jazz and Brazilian Music scene. She is part of pianist virtuoso Otmaro Ruiz’s quartet and is constantly performing in different groups and musical settings. Barreiro is a member of the Musician’s Institute faculty in Hollywood and the Stanford Jazz Workshop faculty during their summer sessions.
Originally from Poços de Caldas, a city in the Southeast of Brazil, Barreiro moved to São Paulo where she was introduced to Jazz and studied Brazilian Music with great musicians in the city at Souza Lima Conservatory of Music, leading to her pursue of a Bachelors Degree in music performance at Berklee College of Music in Boston following by a Masters Degree in Jazz Studies at the University of Southern California in Los Angeles under the tutelage of Peter Erskine.
Past performances with Catina DeLuna and Lado B Brazilian Project, Carol Bach-y-rita, Larry Koonse, Bob Sheppard, Darek Oles, Edwin Livingston, Scott Healy, Katisse Buckingham, Kat Dyson, Kirsten Edkins, Isaac Smith, Bruce Forman, Amy K. Bormet, Christie Dashiell, Darek Oles. She was a featured artist at the Washington Women In Jazz Festival/2017, has received an Outstanding Soloist Award at Monterey Next Generation Festival/2014 and has been praised by her personal approach to the instrument.
“Barreiro was a constant source of joy the entire evening with a very clear and precise ride cymbal
sound.” Robert Bush, jazz critic NBC San Diego.