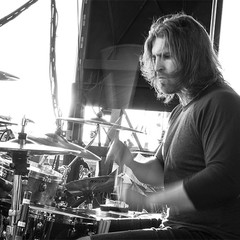 Cartland Blake Richardson is the drummer for American progressive metal band Between the Buried and Me, as well as the former drummer for the deathcore band Glass Casket.

Richardson attended middle school at Calvary Baptist Day School in Winston-Salem, North Carolina. He later attended Mt. Tabor High School and performed an annual drum solo for a school-club project named 'Spartan Spectacular'. Playing since he was 11 years old, he became an immediate fan of 1990s grunge music. Being inspired by bands such as Soundgarden, Nirvana, and Smashing Pumpkins, his passion for heavy music grew as much as his love for drumming did. After taking lessons for several years from local jazz percussionist/drummer Robert Crutchfield, he developed his skills and started playing with his first band, Glass Casket, at the age of 17. After significant touring throughout the US, he graduated high school in 2003 and attended NC State University for two years.

After getting an offer to play drums for home-state friends Between the Buried and Me he helped to start writing the band's third full-length album Alaska and finally left school in 2005 to tour full-time. Since then the band has toured relentlessly. Sharing the stage with friends in Black Dahlia Murder, Bleeding Through, Every Time I Die, and Dillinger Escape Plan helped land them a spot on Ozzfest 2006 with System of a Down and Ozzy Osbourne. After seemingly endless touring to support his first album with Between the Buried and Me, the band began writing for their fourth studio album Colors. This album helped push the band, as well as Richardson's drumming style, into the more progressive metal element. Not going unnoticed, the band's developed new sound and groundbreaking new album helped them earn a spot on the first ever "Progressive Nation Tour", which featured Dream Theater, Opeth, and Three.

Richardson's drumming is characterized by a fusion of death metal elements as well as jazz influences. Noted for his blast beats, odd timing, double bass drumming, and fill-heavy style, Richardson is considered a standout in his field.

During the Progressive Nation 2008 tour Blake performed alongside Mike Portnoy where the two soloed together.