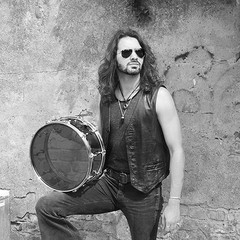 Inspired by the rich music and culture of the ‘60s and ‘70s, Brian Duke grew up learning to play drums like his paisley clad idols. Branching off into the Jazz and Blues worlds, he enriched his grooves playing with Little Tower (formerly the Hoochie Coochie Men), and studying under drum legend Bill Goodwin. Shortly after graduating from Lafayette College with a B.S. in Mechanical Engineering, Brian started playing with the NYC-based alternative rock band, Cale and the Gravity Well. The band broke into the touring scene headlining showcases at SXSW in 2017 and 2018 as well as playing multiple shows at the Singapore Grand Prix. The band released an EP in 2017 produced by Jim Fairchild (Modest Mouse, Grandaddy). In late 2016, Brian also began working with guitar virtuoso Roger Filgate, a former member of Wishbone Ash, tracking drums in a studio co-founded by Filgate. In February of 2017, Brian started drumming for country star Jessica Lynn, embarking on a 2-month European summer tour, where they shared the stage with the likes of ZZ Top and Kenny Wayne Shepherd. Brian has spent much of 2018 on the road with Jessica Lynn, completing more US tours as well as another major European tour. Additionally, Brian drums in his brother’s band, Kyle Duke and the Brown Bag Boys, who continue to build a following in NYC, while breaking into the DIY scenes in D.C. and Ohio. The band will be on tour in the states throughout August.