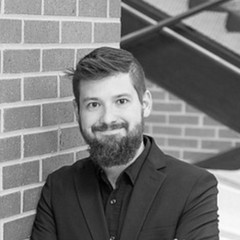 The Wakeland Percussion Program has worked closely with the top clinicians and composers in the country having commissioned multiple works and featured many guest artists in their concerts while also experiencing consistent growth since Mr. Teed's appointment. In the Spring of 2021, Mr. Teed was honored to be nominated and named into the Inaugural Class of 40 Under 40 Music Educators in the Country by Yamaha Music.

Mr. Teed is originally from The Woodlands, Texas where he had the privilege of being under the direction of Mr. Andrew Salmon at The Woodlands High School. He holds a master’s degree in Percussion Performance and a bachelor’s degree in Music Education from the University of Oklahoma, where he was awarded the Ronald J. Dyer award for outstanding contributions to the OU Percussion Studio. During his graduate degree, Mr. Teed wrote for and taught the University of Oklahoma Drumline, was the Assistant Director of the OU Steel Drum Band, and was the Director for the “Sooner Showmen” Women’s Basketball Band.

Mr. Teed has performed and conducted clinics at numerous conventions and festivals including the Classical Music Festival in Eisenstadt, Austria, The National Convention on Percussion Pedagogy in Norman, Oklahoma, and the Percussive Arts Society International Convention in Indianapolis, Indiana. During his time at OU, he earned first place in the University of Oklahoma Concerto Competition in the Graduate Division (2013) and Undergraduate Division (2011). He was a founding member of the Norman Philharmonic Orchestra. His professional affiliations include the Texas Music Educators Association, the Percussive Arts Society. He is also an educational artist for Zildjian and Vic Firth.

Mr. Teed currently resides in Prosper, TX with his wife Jennifer, who is the Assistant Band Director at Pioneer Heritage Middle School in Frisco ISD, and their two twins Kaitlyn Elizabeth and Oliver Vincent.

"The Remo Brand has always been at the top of the head game in marching, concert, and drumset. I have played on Remo Drumheads since starting lessons in the 5th grade. Since then, I have consistently sought out and purchased the Remo Brand to outfit all of my personal drums and the drums at the schools I have worked with."