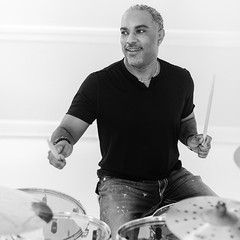 When Calvin was growing up, there was little doubt about what career he would choose, because his talent manifested itself early.

As a toddler, Calvin used to beat on pots and pans with a confident rhythm, a playful foreshadowing of his chosen profession. At age five, he received his first drum set. When he was twelve, he recorded an album with the Napper Singers, a gospel group comprised of his mother and aunts. He began touring with them while still in his teens. Performing in the jazz band and local jazz groups dominated his high school years.

Today Calvin, a self-taught drummer,with a hugely extensive background as a contemporary-gospel drummer, has contributed his talents to some of Gospel's premier artists,some which have earned him platinum and gold sales, as well as Dove Award,Stellar Award and Grammy Certification. Among the artists and producers he has worked and recorded with are Donnie McClurkin,Donald Lawrence & The Tri-City Singers,Kirk Franklin, Kevin Bond,CeCe Winans,Karen Clark Sheard,John P.Kee,Shirley Ceasar,The Clark Sister's and Bishop T.DJakes & The Potter's House Mass Choir to name a few.

A resident of Winston-Salem, NC, along with his wife, Keva, he counts his years on the road as his greatest professional achievement and responsible for instilling in him both discipline and endurance.

Calvin is currently working, as well as recording with, up and coming artists and nationally established acts. He is also the assistant musical director and drummer at Greater Cleveland Avenue Christian Church in Winston-Salem, NC.