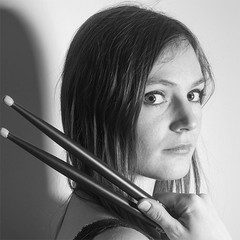 I was born in Toulouse (France) from musicians parents, my dad was a singer - guitarist- flautist and my mum a percussionist. I really started drums at 12 though, when my secondary school music teacher put me in front of drums to play the beat on the kid song "every animal is our friend". I've been a self-taught a few years playing along artists like Blur, the Beatles, Coldplay, Muse and Placebo. I decided I wanted to be a drummer while watching "Soulmates never die" Dvd from Placebo, thanks to Steve Hewitt (the drummer back then). After 2 years taking lessons with Thierry Bordier, I entered the conservatory in José Fillatreau's drumsclass, amazing teacher who introduced us to jazz, snare technique, fusion, rock, pop, double bass drumming and rhythmic illusions (Gavin Harrisson's book is fantastic about that). I got the drums price 5 years later and also finished a musicology jazz degree and a "today's musics" course. From my 15 to 24 years old I played with a bunch of rock/pop/progressive rock/jazz fusion compositions bands, including: Xxelles, La théorie des cordes and Breathing Method.

I also started composing/playing guitar/singing at 14 years old and have a side-project named Mewka. I played about 25 solo gigs singing with my guitar.

In 2015, After moving to the south-east of France, I joined Genesya, a tribute to Genesis and had the chance to learn the exact parts of Phil Collins' drumming, that I enjoy a lot! I also had the chance to quickly find a studio thanks to a sound engineer where i could work my drums for a ridiculous price.

Early 2016 I started posting some polyrhythmic ideas from my practice sessions on the social medias and unexpectedly the first video got its little success and was shared all over the world! That encouraged me to focus and develop "my thing" on the drums. I was also contacted to play on a french rock opera called "Le rouge et le noir" (The red and the black) adapted from a french novel. We played 86 gigs in 5 months at The Palace in Paris! I also became a Tama endorsee and joined a private events orchestra.

In 2017 I went to Los Angeles for the second time to see how things are going there and to figure out how to concretely participate to big auditions. It's not simple as it's mainly your close contacts and network that can help, and live there can also help a bit better than being there 1 week without working visa haha! I'll try to work on that as I'd like to do american artists (french music isn't really my thing). In LA I met David Levine, Trx cymbal CEO and creator of Hit like a girl contest. He introduced me to DrumChannel, and we shot a show called "Veronica One-on-one" with only female drummers as guests, with Veronica Bellino (ex drummer of Jeff beck) as host. Thanks to that I've finally been able to make a composition to play drums on, called "Room 8", and I keep on composing other play alongs. I became an endorsee with Cympad, Remo and Meinl cymbals and started being part of various drums exam judging panel.

In 2018 I started giving masterclasses about polyrhythms, ostinatos and odd time signatures (after giving private lessons for about 30 students over the years) and taught my first drum camps. I played at some drums festivals and in august travelled in Vancouver to shoot some videos with Drumeo! I also could participate to some auditions in France and became the new permanent drummer for french artist "Jenifer" and french youtuber "PV Nova", whom are touring in 2019. As soon as I have time I keep doing practice sessions to work on new compositions and keep discovering and working ostinatos/polyrhythmic ideas on the kit that I'm willing to share!

The last past years I've been discovering and influenced by a lot of Jazz - fusion / progressive rock/metal bands like Snarky Puppy, David Maxim Micic, Plini, Dream Theater... I firmly grow my playing into that kind of vibe!