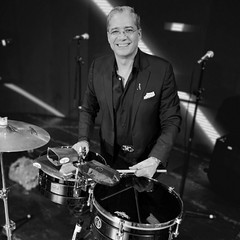 Carlos Perez-Bido is a Spanish born percussionist descendent from Dominican parents and raised in Puerto Rico.  He has been recording and performing in various musical genres for more than 45 years. This 5-time Grammy winner attest to the well-versed Latin Percussion and Jazz backgrounds sought after by artists wanting his experience, crisp & clean sound on their performances. Carlos just finished the Tour Salsa Big Band with Ruben Blades and Roberto Delgado's Orchestra visiting several venues in the U.S., Europe and South America. He constantly works with the cream of the crop on the salsa scene in Panama and abroad with artist such as: Ruben Blades, Omar Alfano, Gilberto Santa Rosa, Jose Alberto “El Canario”, and Tito Nieves. Carlos performed live at the 18th Latin Grammy Awards Ceremony with Ruben Blades in Las Vegas. He has also performed live at the Lugano Estival Jazz 2012 with Sheila-E and with Giovanni Hidalgo in Spain. He has performed with Delgado's band in venues throughout the world in more than 15 countries along with Ricky Martin, Stevie Wonder, Prince, Sting, Macie Gray, and Earth Wind and Fire. His most recent recording with Blades, "Paraiso Road Gang" was nominated for Song of Year at the Latin Grammys 2019.