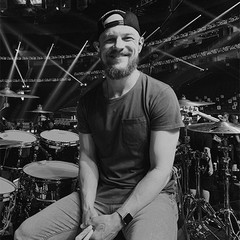 A Toronto native living in Nashville since 2003, Chris Kimmerer has toured with Sonicflood, Mat Kearney, Steven Curtis Chapman, Steel Magnolia, Eric Paslay, and many others. In 2012, Kimmerer joined Thomas Rhett’s band and has since fulfilled MD, band leading, and recording roles. When not touring, Kimmerer operates The Brown Owl Studio in Nashville, TN which he owns.

Kimmerer performed on SNL in March of 2019 and then headed to Australia and Hawaii for a handful of headline dates. He prepped Thomas Rhett’s 2019 Very Hot Summer tour for the month of April before kicking off a sold-out Canadian tour in May. The US leg of that tour started in June while celebrating a #1 record on the Billboard 200, as well as Kimmerer’s 10th #1 song on country radio as a drummer!

A very busy year for Kimmerer already with tour and promo dates running through fall of 2019, including stops at approximately 40 amphitheaters across the US and Canada, Madison Square Garden, Chicago’s United Center, and wrapping with a sold-out show at Nashville’s Bridgestone Arena.

“I literally tell people all the time, Remo drumheads let’s my drums sound like my drums.  Other brands make drums only sound like those heads...”  -Chris Kimmerer