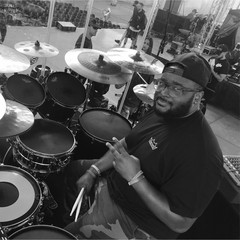 Born in Dayton, Ohio on March 26th, 1988, Christopher “Chris” Stokes was destined to have drums apart of his life long term. Stokes' earliest memories are as a three-year-old where he could be found in the kitchen grabbing pots and pans from the floor cabinets. It was then his parents made sure that they didn’t steer him away from the potential they saw. Growing up in the church led to Chris interest in music which would ultimately lead to his passion for drums. However, being one of the younger drummers around town Chris had to earn his stripes. He played and practiced as much as he could and made sure to take full advantage of any opportunities he was afforded.

Stokes relocated to Orlando, Florida in August 2006; where he embarked on his journey of music on a larger scale. Over time Chris became known as a solid, dependable drummer in Central Florida and became the house drummer for the B.B. King's Blues Club All-Star Band Orlando. His time there helped his music library grow and seasoned him to tackle anything thrown at him.

Chris became a regular on the music scene in Central Florida by playing for several prominent corporate bands and different local churches. Fast forward to February 2017 when Chris received the call to be apart of the band for the Love + Dance World Tour with star Luis Fonsi. Stokes accepted and the rest is history; as he is currently still apart of this amazing experience. Traveling the globe expressing his sound and making the crowd move is a feeling that will never get old from behind the drums.

Stokes gives all his credit to God and his parents for the gift he was given and for allowing him to follow his dreams. Some of Chris’ inspirations come from the likes of drummers such as Teddy Campbell, Dave Weckl, Calvin Rodgers, Carter Beauford, Chris Dave, Little John Roberts, and of course the many people he has come across that have encouraged him to keep pushing and striving for what he wanted to do all his life. Chris proudly endorses Remo Drumheads and Vic Firth Sticks.