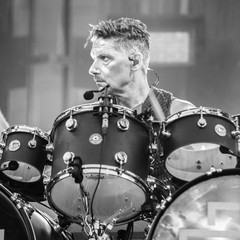 Christoph Schneider was born in Berlin, East Germany. His parents wanted to learn him an instrument, so he went to a school connected with an orchestra where he got the choice between trumpet, clarinet or trombone. His musical hearing abilities were educated during that time and he became very talented on the trumpet. He always was interested in being a drummer and was trying hard to educate himself without having access to a real drum set in his early years.

Finally he managed to take the seat in his first bands like "Die Firma“ and later "Feeling B“. The bands became bigger, the music heavier and finally RAMMSTEIN was founded. The hardest and most spectacular band - Made in Germany.