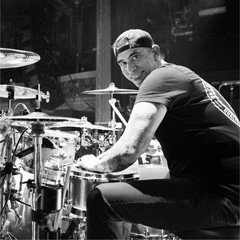 Cyrus Bolooki (born February 27, 1980) is the drummer of the rock band, New Found Glory, and is also an aspiring producer/session drummer.

Growing up in South Florida, Cyrus found himself attracted to music at an early age. His first instrument was a toy drum when he was just a few years old, but he broke the drum within days by hitting it too hard -- something that would stay with him for years to come…

Cyrus didn't originally play the drums, though. He learned music though lessons on the piano/keyboard around age 4, and then picked up his older brother's guitar around age 12, teaching himself mostly, with only a few lessons. It wasn't until the age of 14 that Cyrus began to play the drums, mostly because he couldn't start a band without a drummer, and there seemed to be no good drummers around. However, the first time he picked up the sticks and tried to bang out a beat, he was hooked; the pure challenge and raw power of the drums got to him immediately.

Fast forward about 5 years, and Cyrus finds himself auditioning to be the drummer of a local South Florida band, A New Found Glory. The band had only been together for a few months, but had already recorded an EP as well as played numerous shows. Cyrus auditioned for the band and they were impressed, however they asked him if he could play a little harder the next time around. Memories of Cyrus' old toy snare drum came to mind, and the band soon found themselves dealing with a drummer that would hit so hard that it looked like he could break his real drums at any given performance.

New Found Glory (the 'A' was eventually dropped) toured the US for a few years in a van and trailer, playing whatever shows possible, sleeping on floors, eating Dennys' constantly, doing whatever it took to get to another city. And, all of the hard work began to pay off -- first a deal with a California-based label, Drive-Thru Records (with more tours and two releases to follow), and eventually, a deal with MCA Records in 2000 (who had a development deal with Drive-Thru Records already in place). Cyrus and NFG released their self-titled major label debut in 2000 and big things happened almost immediately, including a support slot on a sold-out Blink 182 shed tour, and major billing on the Warped Tour (NFG has appeared on the Warped Tour 8 different years, in various capacities). Radio play would follow, then MTV, then…you get the picture.

Fast forward again, this time to the present. NFG has been around for over 20 years now, sold close to 4 million records world-wide, played to millions of people on 5 different continents, and there seems to be no end in sight. For pretty much all of his drumming career, Cyrus has used Remo drumheads. While working with Mike Fasano in the studio for the first time back in 2000, Cyrus realized how important Remo drumheads are to a good tone on records. And, throughout his live career, whether taking care of drum setup/maintenance himself or with the help of a drum tech, Cyrus has realized and preached about how important Remo drumheads are towards consistency on the road.

Although his career has been defined by his success with NFG, Cyrus has other passions in the world of music, notably recording/producing, as well as a few gigs in the studio as a session drummer. Cyrus has also manned the drums as a substitute for a few bands, including Goldfinger, NOFX, and Good Charlotte, enjoying every minute of it, even if only for a few songs. His studio credits are starting to add up as well, whether for commercially released acts or just writing sessions for other artists. Cyrus hopes to eventually open a studio for both personal and part-time commercial recording/production.

When not on the road (and even sometimes while still on tour), Cyrus also practices real estate, holding a real estate broker’s license in his home state of Florida.

Look for Cyrus on tour with New Found Glory in a town near you!

"I love the warmness of the Powerstroke 3 Coated Bass.  Still rocking the Emperor Vintage Coated and will ALWAYS go to bat for those…love the “classic” sound of them, and the durability is in my opinion one of the most underrated aspects of that line of heads!" -Cyrus Bolooki