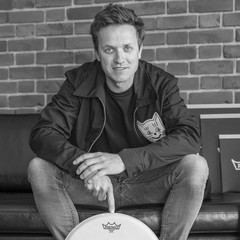 Daniel Schild is a very versatile and highly in-demand drummer and percussionist from Germany who has worked, or is still working, with artists from around the globe.  He's what you could call a chameleon on the drums: He studied Jazz but is also know for his skills in playing Metal, his creativity in playing World Music, his groove for Funk and Fusion or his straight, tight and tasty playing in Pop Music!

Daniel has toured in more than 30 countries, played headlining concerts up to 25.000 people, and recorded drums for over 50 albums.  He is writing workshops for the Drums&Percussion magazine and has also built himself a reputation as clinician/workshop/solo drummer for drum festivals or drummer meetings.

He worked, beside many others, with Ellis Hall, The Tom Coster Trio, Sydney Youngblood, Brandy Butler, Paddy Goes To Hollyhead, Sons Of Seasons or Blaze Bayley and is currently in the drummers seat for Jonas Monar, Chima, Sonhalter and Boogaloo BBQ.