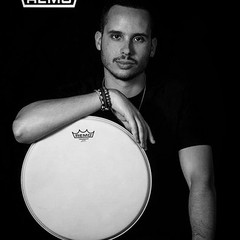 Daniele Piu was born on 5/11/1989 in Sassari, Italy. He enrolled in 2001 at the "Luigi Canepa" conservatory in Sassari in the class of percussion instruments of Maestro Ivan Mancinelli, where he graduated in July 2010. During these years he has collaborated with Sardinian wind orchestra, small Sardinian string orchestra, "De Carolis" opera house, Symphony orchestra of the Sassari Conservatory, jazz orchestra of Trieste, choir orchestra Santa Cecilia, Orchestra of the Cagliari Conservatory, Banda Musicale of Sassari and Ploaghe, Sassari Percussion Ensemble, Associazione Spazio Musica, Associazione Teatro e \ o Musica, participated in jazz festivals, in ensembles of ancient music and ceremonies and official inaugurations in front of the president della Repubblica, has collaborated with artists such as: David Short, Nanni Moretti, Nicola Piovani, Vincenzo Mazzone, Pinuccio Sciola, Federico Malamann, Joe Perrino, Maria Luisa Congiu, Etnias, Mory Thioune, Mor Sow, Fabrizio Vella, NEJA, Ivan Satta, Pilar Arejo and others ... He has participated in various masters with world famous percussionists and drummers (Peter Sadlo, Steve Smith, Dave Weckl, Ellade Bandini, Cris Coleman and others) and carries out activities in the recording studio as a drummer \ percussionist and arranger with active records at the Soundroom of Alghero, collaborates with Afro ensembles and Senegalese musicians, specifically with the Griot Mory thioune (percussionist by Zucchero and Youssou N'Dour) and Mor sow in Sardinia and Corsica. Since 2010, he has been teaching in middle schools, music high schools and civic schools in the province of Sassari. Currently he is tenured teacher in Percussion in the musical section in the state secondary school N ° 2 of Alghero. In 2013, he joined the Sardo Etnias group as a drummer and percussionist. From 2012, he began his career as a producer by opening the Isula Records production house in Alghero, completing various projects and records with Sardinian and non-Sardinian artists. It is part of the Electro \ Funk duo The Encore, with a single released in January 2016 "Fall Into The Deep", edited by the Roman manager Alex La Gamba.

He then joined as a drummer in the "Cover Garden" Band known for its musical versatility and events.

March 2017 becomes Endorser for the AGNER DRUMSTICKS PASHA flat brands, in April 2017 he participates in the 1000 Beats drums and percussion festival in Selinunte in Sicily, sharing the stage with big names like Chris Colemann, Jojo Mayer, Evelyn Glennie, Howard Stevens and other artists international, in August 2017 the new single of the project The Encore comes out together with the partner Maurizio Pinna who sees a collaboration with NEJA and Federico Malaman.

In October 2017 he performs at the Musika fair in Rome, and from November he starts a Masterclass tour that will take him around Italy.

Also in 2017 an Italian Masterclass tour starts all over Italy passing through Rome (Charleston School, Officine Musicali), Venice and other Italian cities, just in July of this month in Rome he won the prize for the national competition for drummers "100% Drummers ". And just in October 2018 he holds a Masterclass together with Maxx Furian, Daniele Chiantese, and Gabriele Morcavallo in Alghero.

In 2019 the collaboration with Endorser with the world battery brand Ludwig and the leather brand Remo begins with a video sponsored by the Italian company and distributor Aramini for the new series of Colortone skins, and prepares the new dates of the tour clinic where it will present his book "Do you have a sense of rhythm?" which will take him around the boot starting March 30 in Rome.

In July 2019 he takes part as judge in the "Charleston" national drums competition together with important drummers of the Italian drums.  In October he plays at the "Musika" fair in Rome for the Pasha Cymbals brand and also in October of the same year he holds a Masterclass together with the world famous drummer Dom Famularo, and drummers Corrado Bertonazzi, Gabriele Morcavallo, and Massimo Russo.

In November he plays "Musica in fiera" at the national music fair in Chieti. In December 2019 his first single "LIFT" written together with the world famous drummer Kaz Rodriguez also published in an article in the national magazine Concord.it.

January 2020 will be present at NAMM in Los Angeles for meetings with world-renowned companies and musicians with the aim of preparing and organizing the new 2020 / 2021 events both nationally and internationally.

From September 2020 he becomes a teacher of drums and rhythmic awareness of the music therapy project "Swim'n'swing" - "rhythm and swimming", funded by the Sardinia Region conceived by the Music therapist Dario Masala, with the professional collaboration of athletes such as Filippo Magnini and musicians such as Massimo Moriconi and Max Rosati.

October 2020 records the entire family of "Pasha Cymbals" cymbals for the ValmusicPro company, demo videos that can be viewed on the official site pashacymbals.com.

In November 2020 he released his first solo album "Drum Experience" completely produced, played and composed by Daniele Piu, recorded at the Soundroom studio in Alghero by Maurizio Pinna and mastered by Giuseppe Zaccaria at the Rome Mastering Studio and by Peter Doell at the After Master Studio of Los Angeles.

February 2021 joins the label "La Fucina Dell'Arte" with which he produces the Video clip of the song "Drum Legend" which is part of the "Drum Experience" project that will soon be brought Live for Italy ... And not only!