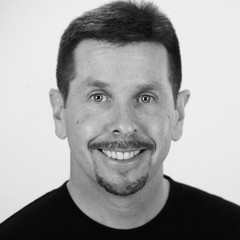 To say that drum corps and the marching arts have been a major part of Danny Raymond’s life would be a gross understatement.

Growing up with a father who was heavily involved in the drum and bugle corps activity, Danny had sticks in his hands at the age of three. His childhood was one from a generation minus smart phones, apps and computers, and as Danny puts it, “We didn’t talk about Google at my house; we talked about Paradiddles. Which incidentally, you can look up on Google.”

Danny began his professional marching career as a marching member in the New York Skyliners Senior Drum & Bugle Corps from 1987 – 1988, and was crowned the Individual Snare Drum Champion, Drum Corps Associates, in back-to-back years, 1989 and 1990.

Through the years as a percussion educator, Danny has worked with high schools, senior corps, junior corps, and private students, including some time with the Syracuse Brigadiers, Boston Crusaders, Carolina Gold, and most recently, the Santa Clara Vanguard. He has also recognized in the WGI arena as a consultant with Infinity Percussion, the Orlando based WGI World Open finalist.

As a composer and major contributor for Tapspace percussion publishing company, Danny has penned quite a few solos for snare drum and drum set that have been performed by students all across the country.

To round out his rudimental activities, Danny also adjudicates marching arts contests, and is proudly affiliated with the FFCC, FMBC, SWFIEA, and NWAPA judging circuits.

Danny spent more than 25 years with the Walt Disney World company as a performer, show director, and audition facilitator. His first Disney assignment with the Hollywood Studios was in a group called the Hollywood Brass, soon thereafter known as the Hollywood Hitmen. This band featured some of Orlando’s finest brass and rhythm section players covering all genres of music from the Tower of Power soul band to famous Hollywood Movie Fanfares.

In 1995, Danny was one of three casted performers in the wildly popular percussion street act known as Da Jammitors. Using a combination of percussion mastery and hilarious street comedy shtick, many consider Da Jammitors to be “must see” entertainment at the WDW resort in Orlando.

Staying on the cutting edge for his craft and industry, Danny is reaching out to students all over the world providing private lessons via video conferencing.

More information about Danny Raymond can be found at http://www.dannyraymonddrums.com