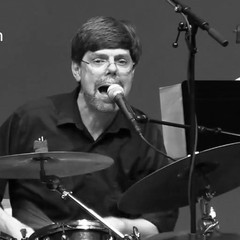 For thirty years Dave Tull has been known as a world-class jazz and big band drummer. For the last ten years he has built a reputation as a great jazz singer, songwriter and bandleader. In July 2016, Dave became the drummer for the iconic Barbra Streisand and has played three US Tours, including the live recording in Miami for a soon-to-be-released Netflix special.

Dave’s celebrated first CD, “I Just Want To Get Paid”, continues to get regular airplay and sell well eight years after its 2009 release. Dave’s second CD “Texting and Driving” is in the works, slated for release in mid-2017.

Dave has led his trio at The Vail, CO Jazz Festival, The prestigious Los Angeles County Museum of Art Jazz Series (including a two-hour broadcast on KKJZ!), The Newport Beach Jazz Party, The Nash in Phoenix, The Arts Garage in Boca Raton FL, The Miami Jazz Coop in Coral Gables, FL, The Jazz Showcase in Chicago, The Oregon Coast Jazz Party, and The “Jazz at Joe’s” concert series in Bend, OR among others. He was a featured performer both singing and drumming at the 2015 and 2016 Frank DeMiero Jazz Festivals. Dave has toured four times in recent years trading tunes and singing duets with vocalist Rebecca Kilgore, and also has performed with pianist/vocalist Judy Roberts.

Dave toured the world from 2000-2010 as drummer and lead vocalist for Chuck Mangione. Dave’s vocal on Mangione’s “The Children of Sanchez” and his bebop scat vocal on “Dizzymiles” has been featured at hundreds of concerts including The Playboy Jazz Festival at Hollywood Bowl and The Blue Note in New York City. A video of Dave with Mangione can be viewed at http://youtu.be/be-N6UnS7Bk

Recently, Dave has served as drummer for Brian Bromberg’s recent tour and singer/actor Robert Davi’s shows at The Melbourne International Jazz Festival, Budapest Arena, and many other concerts around the world. Dave plays on four of singer Michael Buble’s CD’s including Buble’s notable version of “Moondance”. Dave has played drums for several episodes of the FOX TV show “Family Guy” and has backed Seth MacFarlane with The Ron Jones Influence Big Band. https://youtu.be/XvKlat3PPpw?t=10s Dave is the drummer on eight of Cheryl Bentyne’s (Manhattan Transfer) CD’s and has done six tours of Japan with Bentyne. She had Dave sing on two tracks of her CD “Moonlight Serenade”, including the song “Tull Tales”, named after Dave! Dave wrote the vocalese lyric for Bentyne on “All of You” for her 2009 Cole Porter Songbook CD. Dave has played with Jack Sheldon’s Quartet and Big Band since 1991 and is on Jack’s 2007 CD, “Listen Up” on Butterfly Records. Dave has played with the Steve Huffsteter Big Band since 1998 http://youtu.be/7VXnkWw5ey8 and is on Steve’s CD “Live at Café 322”. He has been a member of The Les Brown Band of Renown since 1999, playing on that band’s CD, “Session 55”. Dave was the drummer for The Steve Allen Big Band for 5 years and performed many years with The Paul Smith Trio. Richie Cole has featured Dave on drums and vocals, and Colehas arranged two of Dave’s original songs for the band!

An active jazz clinician on both drums and vocals, Dave teaches drum set at Pasadena City College in Pasadena, CA, and is the drum set instructor for the Los Angeles Jazz Society’s “Bill Green Mentorship Program”.