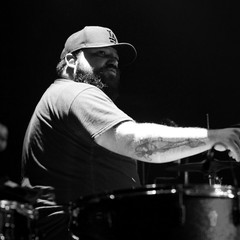 David Hidalgo Jr. is an American drummer who plays in the punk rock band Social Distortion.

Dave was born in Los Angeles, California, and started playing drums at the age of four by doing shuffles on a snare drum while his father played along. His dad, David Hidalgo Sr., is the singer and guitarist for Los Lobos and introduced Dave to many different types of music from a very young age. This has helped him to develop the ability to perform a multitude of styles, which is apparent in his catalog of work. Dave didn’t have formal drum training, but once he was able to reach the pedals, he began listening to records in his garage and taught himself to play along. Dave got his start in professional drumming by reaching out to Suicidal Tendencies after hearing that Brooks Wackerman had left the band. After getting an invite to come on down and jam with them, he did his first show a week later at the Dogtown and Z-Boys Premiere Party. He toured with ST off and on for 6 years and appeared in their live DVD, Live at the Olympic Auditorium.

Dave then went on to play with Brody Dalle’s band, Spinerette, before auditioning for Social Distortion in 2010. Having grown up listening to Social D, when he heard they were looking for a drummer, he eagerly put his name in the hat. They auditioned hundreds of drummers, but Dave secured the position and has played with SD ever since.

When he hasn’t been touring with Social Distortion, Dave has also played live alongside many artists, including Chuck Ragan, Dave Hause, The Bronx, The Drips, Los Lobos, CJ Ramone, Jeff Beck, and Cyndi Lauper. He has appeared on albums with many of those artists as well as Greg Graffin and Brian Fallon, just to name a few.

Dave is a rabid sports fan, and obsesses over the Dodgers and Lakers. When asked what music he is currently listening to, his reply is, “Sports Talk Radio.”

“Growing up we always had Remo heads on my dad’s drum kits. As I became more independent I tried other companies and always came back to Remo. That classic combination of warmth, attack and durability is perfect for everything I do. I love the vintage and modern sounds I can get from these heads. There is no comparison. I’m honored to be part of the Remo family!”  -David Hidalgo Jr.