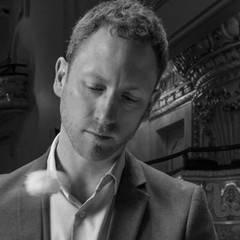 Principal Timpanist of the San Francisco Symphony since 2016, Ed Stephan is recognized as one of the most exciting and dynamic timpanists in the United States. He has been praised for his “strong and multi-faceted playing” as well as his “captivating command behind the instrument.” Stephan has also held principal timpani positions with the Pittsburgh, Dallas and Fort Worth symphony orchestras. While in Texas, he made numerous solo appearances and was a recipient of the American Airlines Distinguished Musician Award.

Stephan began his percussion training at the age of six. He holds a Bachelor of Music degree from the University of North Texas and a Master of Music degree from the New England Conservatory of Music. He was a fellow at the Tanglewood Music Center in 2000 and 2001. During his time in Boston, Stephan performed with the Boston Symphony Orchestra, the Boston Philharmonic, the Rhode Island Philharmonic, and the New Haven Symphony.

In recent years, Stephan has appeared as a guest with the Chicago Symphony, The Philharmonia Orchestra of London, the Kansas City Symphony, and the Dallas Opera Orchestra. He has served as the principal timpanist of the Crested Butte Summer Music Festival and is currently timpanist of the Grand Teton Music Festival and the Aspen Festival Orchestra. He has recorded extensively and can be heard on a number of Grammy nominated and award winning albums.

Mr. Stephan is in demand as a teacher and clinician. He presents regular masterclasses throughout North America, Europe and Asia at many of the world’s most prestigious conservatories, universities and festivals. He is a co-presenter of the annual Washburgh Timpani Seminar, and is on the faculty at the Aspen Music Festival and School. Ed currently serves as chair of the percussion department at Duquesne University in Pittsburgh, co-chairs the percussion department at the San Francisco Conservatory of music, and makes regular visits to Northwestern University. Ed proudly endorses Adams timpani, Pearl percussion products, Remo percussion products, Luft Timpani Mallets, and Mike Balter mallets. Off stage, Ed is a passionate cyclist, and a commercial pilot studying to be a flight instructor.