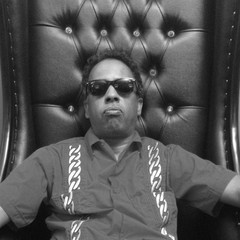 Percussion madman Eric Bobo made his first public appearance at the age of 5, performing on stage with his father, Latin Jazz legend Willie Bobo. When Eric was 15, his father passed away and Eric took over Willie’s Latin jazz Band for a full year while still in high school. But as the jazz scene evolved through the 80s and hip hop became a dominant force in music, Bobo found his calling. With a recommendation from a friend, Bobo got an audition with the Beastie Boys and before he knew it, he was on their 1992 national “Check Your Head” tour.

Bobo ended up recording with the Beastie Boys for both their acclaimed ‘Ill Communication’ and ‘Hello Nasty’ albums. While on tour with the Beasties, he met Cypress Hill and joined the group as their percussionist for their world tours, splitting time between both groups. As the Beasties began taking major touring breaks, Bobo became an official full time Cypress Hill member in 1994 and has toured and recorded with the group ever since. Throughout his career, Bobo has been known for recording and performing with a large variety of leading artists including The Black Crowes, 311, Gnarls Barkley, Rage Against the Machine, Fort Minor, Tito Puente & Ella Fitzgerald amongst others.

In early 2009, Bobo started a new project with DJ Rhettmatic called ‘Bobo meets Rhettmatic’. The name of the project came from the song collaboration they did from Bobo’s debut album. This DJ/Percussion duo was something new and fresh on the LA hip hop scene and after releasing 2 mixtapes since forming this group, they have traveled around the world showcasing their skills to a whole new audience. They have recently rebranded their group name to ‘Cypress Junkies’ as an homage to their respective affiliations.

In 2011, Bobo teamed up with Chilean DJ/Producer Latin Bitman to form a group called ‘Ritmo Machine’. Their album ‘Welcome To The Ritmo Machine’ was released in 2011 on Nacional Records to critical acclaim. The music was a mix of hip hop, afro beat, dub step & electronic sounds all within a strong Latin base. Some of the featured artists on the album were Sick Jacken (Psycho Realm), Sen Dog (Cypress Hill), Ana Tijoux, Mix Master Mike & Money Mark (Beastie Boys) P-Nut (311), Chali 2na (Jurassic 5/Ozomatli) & Pato Machete (Control Machete). Ritmo Machine was featured in both 2012 editions of Lollapalooza Chile & Brazil, Vive Latino & the Cypress Hill SmokeOut as well as having their music featured on commercials and cable tv shows.

2013 is set to be a busy year for Bobo as he and Cypress Hill will going into the studio to start recording the followup to their 2010 release ‘Rise Up’. Also there is a new album & tour in the works for the Cypress Junkies & he will begin work on his next solo album.