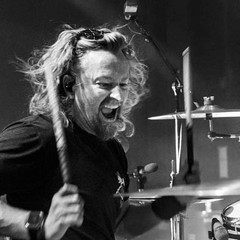 Eric Kretz is a drummer, producer, and founding member of the rock group, Stone Temple Pilots.

According to Eric, he began "banging on pots and pans" at the age 10. His early musical influences included bands like KISS, AC/DC, Aerosmith, RUSH, Led Zeppelin, Queen, Mahavishnu Orchestra, Genesis, Return to Forever, and Jeff Beck. After practicing religiously for a year, Eric received his first drum kit at the age of 11, a CB700.

Pursuing a career in music, Kretz moved to Los Angeles in 1986. After playing in a string of progressive rock type bands, he answered an ad in "The Recycler," a local classified ads newspaper which led to him hooking up with the late great vocalist Scott Weiland and bassist Robert DeLeo to form Stone Temple Pilots. Once Robert's brother Dean stepped in to play guitar, the band was officially complete.

They found immediate success upon releasing their debut album "Core" in 1992 and went on to become one of the most commercially successful bands of the 1990s. STP released four more studio albums before separating in 2002, after which the band members partook in various projects, most notably Velvet Revolver and Army of Anyone. (In 1997 during their year apart from Weiland, Kretz and the DeLeo brothers also formed the group Talk Show, releasing an album and touring in its support.) STP eventually reconvened in 2008 for a reunion tour, released a new self-titled album in 2010, and have been actively touring since.

Kretz has also contributed to the band's songwriting, most notably writing the music to the band's 1996 hit "Trippin' on a Hole in a Paper Heart." Along with then lead vocalist Scott Weiland, Kretz also wrote the lyrics to the Grammy Award-winning hit "Plush" off of STP's 1992 debut, "Core."

Apart from his career as a drummer, Kretz also owns and operates Bomb Shelter Studios in Los Angeles. Over the years, he has worked with several notable artists, in particular engineering and mixing the live recordings for "The Henry Rollins Show."

When Weiland left STP in 2013, Linkin Park's Chester Bennington was brought in to handle vocal duties. The group then released a five-track EP titled "High Rise" on October 8, 2013. In 2015, Bennington left the band to focus solely on Linkin Park. (Sadly Bennington took his own life in July of 2017.) The band then launched an online audition for a new lead vocalist along with the statement, "If you think you have what it takes to front this band, record with this band, and tour with this band, we would dig hearing from you".

In November of 2017, STP performed at the Troubadour in Hollywood with their new singer, Jeff Gutt, who beat out roughly 15,000 hopefuls during the extended audition process. The Michigan native who logged time in the early-2000s nu-metal act Dry Cell, among other bands, and more recently a contestant on “The X Factor,” was one of the last to audition during the final two days of the process. The following year, the band released their seventh studio album and second self-titled release. Last February, STP released “Perdida,” the band's second album featuring Gutt.