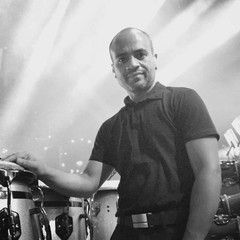 Eric Velez is one of the most respected Latino percussionists of his generation. He is of Puerto Rican descent, and was born and raised in the Bronx, New York. Eric learned to play congas, bongos, and timbales at the young age of three. His first musical performance was with Grupo Fascinacion at the age of sixteen. At the age of seventeen, Eric played with Eddie Palmieri and in 1993 made his first recording with Marc Anthony for the movie soundtrack “Carlito’s Way” and joined his band. In 1996, Eric continued to record under RMM Records with producer Isidro Infante. Eric traveled with the RMM Band, featuring Tito Puente. In 1997, Eric performed for President Clinton’s 1997 Inaugural Ceremony. A year later, Eric recorded with Celia Cruz. In 1999, Eric joined D.L.G. and also recorded with various artists under record producer Sergio George.

In 2012, Eric performed with Marc Anthony during the finale of Q’Viva: The Chosen. In June, Eric played for President Obama at the “Latinos for Obama Fundraiser” at the Jackie Gleason Theater. That same year, Eric received an award by Drum! Magazine as “Runner-up Latin Percussionist of the Year.” Eric toured this summer with the “GIGANT3S Tour” featuring Marc Anthony. He will be ending the year in Latin America with the “GIGANT2S Tour” featuring Marc Anthony. In 2013, Eric played at the Commander-in-Chief Inaugural Ball for President Obama and then continued to perform at the Latin Billboards once again. Eric Velez performed on the Today Show as Marc Anthony promoted his 3.0 album which Eric recorded the pop version of “Vivir Mi Vida.” In August, Eric performed at the Curacao Jazz Festival and finished that year with a performance at the Latin Grammys.

In 2014, Eric played at the Maestro Cares Foundation Gala at Cipriani in New York City. He then went on to perform at the Premios Lo Nuestro and Latin Billboard Award shows. In July, Eric performed at Yankee stadium with Marc Anthonyand Romeo Santos. The year ended with a “GIGANT2S” tour once again, but this time featuring Marc Anthony and Juan Luis Guerra which lasted from August to December. Early 2015, Eric performed at the 2nd Annual Maestro Cares Foundation Gala followed by the Premios Los Nuestro Award show. In June, Eric had the opportunity to play in St. Petersburg, Russia for a Latin Summit and toured Europe in July. From September to November, Eric toured with Marc Anthony and Carlos Vives, finishing 2014 with a recording for Luis Enrique and Alejandro Sanz.

Eric performed once again at the 3rd Annual Maestro Cares Foundation Gala in 2016, followed by the St. Lucia Jazz Festival. In the summer, Eric toured with Marc Anthony throughout Europe ending with a show at the O2 Arena in London. In August and September, Eric played at Radio City Music Hall for “Private Collection” performances with Marc Anthony. Eric finished the year with the Lain Grammys, held in Las Vegas.

In 2017, Eric started the year by performing at the 4th Annual Maestro Cares Foundation Gala. The Full Circle Tour with Marc Anthony began in May and ran through December.

Eric is currently endorsed with Zildjian cymbals, Vic Firth sticks, Remo drumheads, and Toca Percussion. The soft release of Eric’s new Signature Series Toca Percussion Set were revealed at the Summer NAMM show in July 2017 held in Nashville. It consists of congas, bongos, and timbales. They were officially released in Winter NAMM 2018.