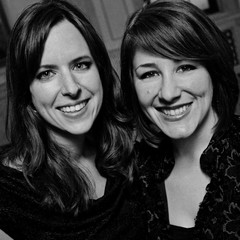 Escape Ten is a percussion duo formed by Dr. Annie Stevens and Dr. Andrea Venet. Escape Ten is passionate about exploring all genres, and expressing it creatively through the colorful world of percussion. The duo performs a varied and exciting spectrum of music- including contemporary, pop, jazz, and classical selections. Repertoire includes their own innovative arrangements, as well as arrangements and compositions written exclusively for the duo.

Escape Ten actively performs around the country and has their own publication series of new percussion duos through Keyboard Percussion Publications (KPP). In addition to a showcase concert at the 2016 PASIC Convention, Escape Ten gave the world premiere of their commission, 2300 Degrees by Ivan Trevino in Atlanta’s Spivey Hall.

Andrea and Annie are both Malletech performing artists, endorse Remo and DREAM Cymbals, and are members of the Percussive Arts Society.