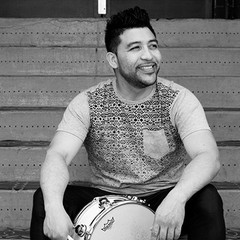 He is currently part of the band of the living legend Stevie Wonder.

With only six years of age he began to play Afro-Caribbean percussion instruments. At age of eight he began his professional career with local groups in his hometown and a few years later he was already performing with national and international artists.

In 2013, he awarded a full scholarship and obtained his Masters Degree in Music Production at Shepherd University in Los Angeles, California. Studied Bachelors in Composition at Ars Nova School of Music in Caracas, Venezuela.

In 2017, his wife, the singer and songwriter Gabriela Cartulano, released her album titled "Tu Amor" produced by Euro Zambrano, which has won 5 nominations for different awards such as: Latin Grammy as Best Christian Album 2017, Arpa Awards as Best Female Vocal Album 2018 and Redemption Awards for Best Female Vocal Album, Best Song of the Year and Best Music Producer of the Year 2018.

He currently works in different activities within the music industry, among them, being part of the band of the world star Stevie Wonder, producer and musician of sessions and concerts, music director of Saddleback Church in Spanish of Pastor Rick Warren (one of the churches Christian churches in the United States).

He has more than 20 years of experience in education and has been part of the faculty of California State University, Los Angeles; and Shepherd University, Los Angeles. He has given Master Classes, Clinics and Workshops in many countries in North and South America and has been exhibitor of different musical instruments during the NAMM Show in the city of Anaheim, California since 2010.