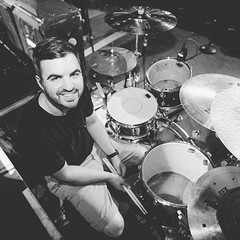 Inspired by his oldest brother, Evan Ambrosio began playing drums at the age of ten. Throughout high school, Evan played in local shows with his friends which led him to pursue music in college. He studied Audio Recording and earned a bachelor’s degree in Music Business at the State University of New York at Oneonta.

After college, Evan toured locally for years with his friends while still balancing his career. In 2012, Evan joined State Champs, a pop punk band based out of Albany, NY, and has been touring full-time ever since.