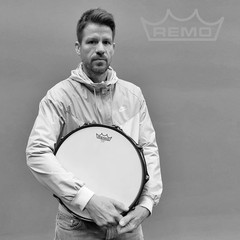 Flo Dauner was born on January 3rd in Stuttgart and grew up in one musical parental home (father is the pianist and composer Wolfgang Dauner). He had his first at the age of 9 public concert and the first recordings did not follow much later at the age of 15 (The United Jazz and Rock Ensemble “Round7” on Mood Records, 1986).  At 18, Flo moved from Stuttgart to Berlin and worked there as a live and studio drummer. Two years later he goes to Boston / USA and studies Drums and composition at the renowned Berklee College of Music.
In 1993 Flo returned to Germany and became the drummer for the Fantastischen Vier, with whom he has given over 800 concerts and with whom he became the first German band in 2000 had the honor of a now legendary MTV Unplugged concertto record.
And right now in 2012, "Die Fantastischen Vier, as first band ever from MTV asked for a second unplugged concert.  This was also recorded in the Balver cave and will be published in October 2012.
Flo played and plays on many of the most famous rock, pop and jazz festivals worldwide including Roskilde, Montreux, Amsterdam, London,
Rock am Ring, Bizarre Festival, Southside Festival, MTV Hardpopdays, Coachella (U.S.), Central Park N.Y. (2006, 2007 and 2010), and much more ...
and in the largest concert halls in the world: Madison Square Garden NY, Staples Center L.A., Budokan Tokyo, Auditorio National Mexico City,
Globe Stockholm, Rod Laver Arena Melbourne, Wembley Arena London, Etc…
In addition to his career as a session drummer, he also always pursues own projects and works for example as a composer for Thomas D,
Samir and Good Men Gone Bad, for which he also works as a producer.
With the band "orbit.experience" founded in 1999 (together with S. Studnitzky, Markus Kössler and Markus Birkle) he publishes 2 studio albums, 1 live album and 1 vinyl maxi.  The promising progressive jazz quartet gives concerts in Germany and tours all over Europe.
"I'm very very happy to be with REMO Drumheads!  The best in the game!!!"  -Flo Dauner