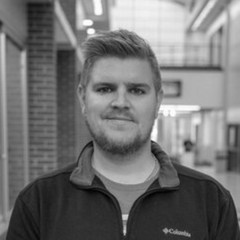 Garrett is a marching percussion specialist in Indianapolis, IN. He is currently the Percussion Director at Plainfield High School.

Formerly at East Central High School, Garrett helped them achieve their 5th Indiana state championship and their first ever WGI World Championship in the 2022 Season.

Originally from South Carolina, he pursued a B.A. in percussion performance with a concentration in jazz. He also performed professionally with the Carolina Panthers Purrcussion Drumline and several bands along the east coast.

Garrett is a front ensemble instructor with Veritas (WGI PIW) and 317 Performing Arts. He has also been on the administrative team of The Blue Knights DBC since 2020.

Along with his roles with Plainfield High School, Garrett regularly helps design shows and soundscapes for several schools across the nation. He lives in Greenwood, IN with his wife Michelle, their son Oliver, and their dog Gryffin.