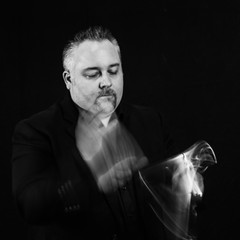 “Jaw-dropping virtuosity and a flair for the unexpected” (PBS) is why Gene Koshinski (b. 1980) has delighted audiences worldwide with his dynamic performances and creative programming. Best known for his extraordinary versatility as a solo, chamber, symphonic, jazz, pop, and world music artist/composer, Koshinski is proud to serve as Professor of Percussion at the University of Delaware. He has performed in Argentina, Austria, Belgium, Brazil, China, the Czech Republic, France, Germany, Japan, Jordan, Slovenia, the UK, Canada, and throughout the United States; including over 200 guest performances/lectures at some of the most prestigious institutions in the world including the Royal College of Music, The Juilliard School, Conservatoire de Lyon, Shenyang Conservatory, Beijing Conservatory, the National Music Conservatory in Amman, and the University of Rio de Janeiro.

As a composer, his works, have been performed in more than 40 countries, on 5 continents, with hundreds of performances per year, and his landmark book, entitled TWO, is currently used in more than 75 university curricula. In 2012, Koshinski was named the recipient of the ASCAP Foundation Nissim Prize for best new score for large ensemble for his work Concerto for Marimba and Choir. While his compositions are most often heard in the concert hall, they have also been heard in television, film, art museums, and ballet productions. Koshinski’s music was used in the award-winning short film The Passage, which premiered at the Sundance Film Festival in 2018, and for a new Netflix series called Wellmania, premiering in 2023.

In 2002, Koshinski won the National MTNA Percussion Competition, and in 2004 finished 3rd in the prestigious Universal Marimba Duo Competition in Belgium. In the years following, his career has been filled with incredible opportunities to perform with many celebrated artists/organizations including NFL Films, Late Show with David Letterman, Mary Wilson (The Supremes), David Samuels, Wycliffe Gordon, Ingrid Jensen, Tom Harrell, Jimmy Dorsey Orchestra, Philadelphia Boys Choir, The Lettermen, Hartford Symphony, Minnesota Ballet, Percussive Arts Society International Convention (9 appearances), and as principal percussionist for the Duluth Symphony for the past 15 years. Koshinski recently became a member of Relâche, one of the country's oldest nonprofit chamber ensembles of more than 40 years. For his work with NFL Films, he can be heard on the Emmy award-winning soundtrack A Century of NFL. Koshinski’s performances have been heard on the CBS, PBS, ESPN and TBS/TNT television networks, Netflix as well as NPR, and he has recorded for the Naxos, Innova, Centaur, MSR Classics, and Equilibrium record labels.

Koshinski is a founding member of the Quey Percussion Duo, a touring group that has dazzled audiences worldwide with their unmistakable style that blends traditions of Western, cross-cultural, contemporary, classical, and popular music to create colorful sound worlds that often place focus on interlocking counterpoint and musical multi-tasking. QPD has generated nearly 200 new works over the past 19 years and has collaborated with renowned composers including Pulitzer Prize recipient John Luther Adams, Emmanuel Séjourné, Alejandro Viñao, Molly Joyce, Phyllis Chen, Allyssa Weinberg, Stuart Saunders Smith, Adam Silverman, David Macbride, Ivan Trevino, Ben Wahlund, and Casey Cangelosi. QPD is the only professional percussion duo in the US that holds a full-time university residency offering an entirely unique experience for its students at the University of Delaware.

Koshinski holds degrees from West Chester University (BM) and The Hartt School (MM and DMA). He is sponsored by Pearl/Adams Instruments, Sabian Cymbals, Remo, and Innovative Percussion, and his works are published by Tapspace, Bachovich Publications, and his own publishing company One Two Press.