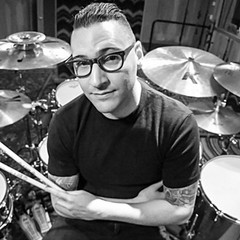 For Gil Sharone, his power as a drummer resides in his masterfully-trained triad of skills as an artist, session player, and clinician. It’s also reflected in three invaluable traits he brings to any situation: musical versatility, razor-sharp instincts, and refined, but inspired technique.

As a teenager, Sharone’s fundamental experiences with drumming were organic; he learned how to play from watching and listening to players of all styles while his twin brother complimented him on bass and guitar.
His fresh perspective, dedication and love for the craft led him to play with many artists he came up listening to like Marilyn Manson, Fishbone, Dillinger Escape Plan, OTEP, Dave Wakeling, Maynard James Keenan, Chino Moreno, HR of Bad Brains and Eek-A-Mouse to name a few.

With his capacity to come into any professional environment and instinctively play exactly what is needed, Sharone has gained a reputation as a veritable drumming ninja.

In a shining example of Sharone’s amazing ability at sonic absorption and understanding, the drummer was called-in last minute to replace Travis Barker on his tour with +44 after Barker broke his arm. Sharone memorized all his parts on a plane ride over to Europe and played the next afternoon without even a rehearsal. His success landed him a retainer on the Australian and Japanese leg of the +44 tour. After doing +44, Sharone’s momentum continued and he was asked to work with Dillinger Escape Plan as well as Maynard James Keenan in Puscifer.

Over the years, Sharone channeled his Zen-like concentration and passion for all types of music into a varied skill set that allowed him to demonstrate his massive drumming vocabulary. In 2005, Sharone started doing drum clinics and also played his first international drum festival Cape Breton Drum Fest. In 2006 and 2011, he was invited to do a clinic at the Percussive Arts Society International Convention (PASIC).

On top of being featured in all the top drumming magazines worldwide and being voted #2 up-and-coming drummer in Modern Drummer Magazine Reader’s Poll in 2008, Sharone continued to play world class drumming events like the Modern Drummer Festival 2010 and the 2012 Tam Tam Drum Fest in Spain, as well as other clinics worldwide.

Paying homage to some of his biggest influences, Sharone channeled his lifelong love of Jamaican styles of ska, rocksteady and reggae drumming into a self-produced award-winning genre-specific instructional DVD called Wicked Beats. The first of its kind, Wicked Beats won the first place Drummie Award in Drum Magazine for DVD of the Year in 2011 and fifth place as DVD of the year in Modern Drummer’s Readers Poll 2012.

Sharone has also toured successfully with his band Stolen Babies—a band he started with his brother and their singer.
His film and television credits include drumming and co-production of the Slackers movie score, drumming and engineering commercials for various Nike and Miller Beer campaigns, and most recently, working on hit reality television show X-Factor and playing on Marilyn Manson’s main title track to the show Salem.

Currently, Sharone continues to work with Stolen Babies while maintaining a busy schedule as a session drummer and clinician.