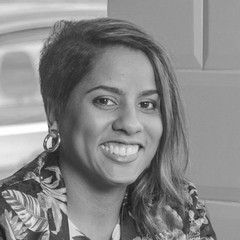 After graduating from the National Conservatory of Music of Santo Domingo in 2012, De La Rosa received a Presidential Scholarship from Berklee College of Music in Boston, making her the first and only Dominican in the history of the college to receive such an award. There are only two of these scholarships available each year for non-US citizens.  In 2016, she graduated with a Bachelor’s degree in Performance and a minor in Music Production and Engineering. While in Boston, she worked with several icons in music such as Antonio Serrano, Terri Lyne Carrington, Steve Bailey, and many more. De La Rosa was selected to be the drummer for exclusive events to represent the college, such as when she was handpicked by the president of the college, Roger Brown, to perform at a fundraiser for US Presidential candidate and former secretary of state, Hillary Clinton in 2015. Also during that period in Berklee, she worked with Javier Limón, multiple times Latin Grammy award winning producer, on José Mercé’s album “Doy La Cara”, which was nominated for best flamenco album in 2016. That same year, De La Rosa became the first Dominican champion of the contest “Hit Like a Girl”, after competing with girl drummers and percussionists from around the globe.

After graduating, she moved to Los Ángeles, California, where she immediately started working for several rising stars in the US, such as Milck, Quiñ, MARO, etc., artists with millions of plays on the most important digital platforms, like Spotify and YouTube. De La Rosa also became an artist for some of the iconic companies that work with drum gear, such as Remo (heads), Meinl (cymbals and sticks), Cympad, etc. And has upcoming performances with iconic artists such as Michel Camilo, Grammy award winning pianist and composer, who is one of the most important exponents of Latin Jazz around the world.

Not only has she worked with dominican megastar Juan Luis Guerra, who has sold over 30 million records, and has won numerous awards including 18 Latin Grammy Awards, 2 Grammy Awards, 4 billboard Awards and 2 Latin Billboard Music Awards throughout his career, but for some of the top instrumentalists in music history as well, such as Marcus Miller and Victor Wooten, who have also won several Grammys for their work. She has also worked for artists who have been number 1 on Billboard, such as Miki Howard, and worked with producers like Jae Deal, who has worked with artists such as Lady Gaga, Snoop Dogg, Janet Jackson and many more. Additionally, she has been a featured artist in some of the largest music conventions in the US and worldwide, like JEN (Jazz Education Network) or PASIC (Percussive Arts Society International Convention), where she was the cover page in 2016 and had her own performance. Also, she has worked with the legendary saxophonist George Garzone and worldwide famous trumpeter Arturo Sandoval.

Since April 2019 and part of 2020, De La Rosa has been working in Alejandro Sanz’s acclaimed world tour “#LaGira”, where songs from his most recent album “#ElDisco” are featured. The album has reached #1 in at least 14 different countries. The concerts have taken place in front of tens of thousands of people at some of the most emblematic venues, such as The Madison Square Garden in New York or the Wanda Metropolitano stadium, home of the Real Madrid soccer team. The tour has featured artists such as Shakira, Luis Fonsi, Pablo Alborán, among others.

On Remo... "Consistency, resistance and great quality of sound no matter what."  -Helen De La Rosa