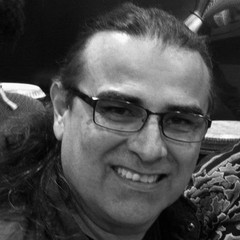 At the age of 16, he was inspired by musical members of his family to play drums. Homero was 17 when he joined the Army, and after basic training was stationed in Honolulu, Hawaii. Honolulu is where Homero got his chops playing six nights a week. Honolulu was also where Homero began recording.

After six years in Hawaii, Homero returned to El Paso where he learned production skills at the Music and Theatre Production Company and continued doing sessions. Homero then moved to San Diego, where he studied with James Morton and David Baker while playing percussion for the Grossmount College Dance Department and working the local scene. He later moved to Los Angeles, where he continued his percussion education and advanced his career.

Over the years, he has traveled internationally, played with numerous artists and recorded CDs in different music genres. He has done various TV and Radio productions and in the new media, several Internet spots. Venturing into producing, his latest effort “El Canto De La Gente” with the legendary Viola Trigo is due out soon.

Homero has received international recognition as a performer, educator, producer and humanitarian. Homero has created a number of percussion programs such as the award-winning “StompKids” and “The Independent Drumline.” He has been recognized for his passionate work as an educator by organizations including the Boys and Girls Clubs of America and Pasadena City College.

Homero is currently a faculty member of the Claremont, California Community Music School. He conducts a monthly Cajon Workshop at the REMO Recreational Music Center in North Hollywood, CA. In addition, he leads the Latin Jazz group “Una Noche” and the “Mixto Percussion Ensemble”.