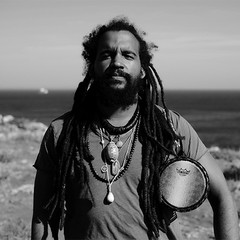 Authentic, passionate and eclectic, Iúri Oliveira is a professional percussionist. His styles flows between World Music, Latin Jazz, and Fado, among others. For him, music is an encounter between cultures, a kaleidoscopic expression in a rhythm so dynamic as life itself.

Iúri Oliveira is a sideman percussionist, and a studio & tour musician. Having worked with several artists such as Sara Tavares, Selma Uamusse, Cesária Évora Orquestra, Tété Alhinho, Sara Alhinho, Ana Lains, and others, he still managed to create space for his own projects, like Criatura, They Must Be Crazy and Loosense.

After performing with Madonna at the Billboard Music Awards 2019, Iúri Oliveira is currently part of the Madonna Madame X Tour 2019/2020 as sideman.

His versatility, charisma and compelling energy led him to perfect a myriad of sounds, rhythms and compositions that make him a reference among artists, producers and composers today.

Coming from a family with influences between Portugal and Angola, he became a musician at the age of 14. In 2009 he went to the Rhythm Studio (London School of Popular Music) and fell in love with a variety of styles. This is what drives and propels his multicultural and tireless heart. He later went on to study at Drumdrumdrum to expand his knowledge on World Music, Hybrid Percussion and Solo.

More than music, Iúri Oliveira shapes atmospheres, builds lexicons, and embodies the passion for each artist and context. At the service of music, his instruments and techniques are the colors with which he has painted a unique path.

“Serving music as a hole, in each timbre and sound, expressing and reflecting all my emotions. My legacy will be to inspire someone to make music, as I once was.”  -Iúri Oliveira