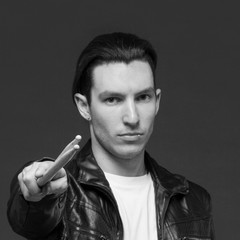 James Payne is a world-renowned drummer who has gained distinction for his highly developed and original performance techniques which draw from his rich and varied musical background.

James Payne was born on August 8, 1988, in Milan, Italy. His first approach with drums began at the age of 10. In 2007 he formed the band Hiss from the Moat with which he recorded the first EP "The Carved Flesh Message" and started to play shows all over Italy and Europe. In 2008 Sickdrummer.com released James Payne's interview and footage and in the same year, he joined the band The End of 6000 Years with which he played shows constantly all over Italy. In 2009 he joined the band Awaken Demons, signed to “Trustkill records”, with whom he toured constantly worldwide and played over 100 shows per year. In late 2010 he joined the Pop band Broken Heart College, signed to “Universal Music” as a recording and performing member of the band with which he performed on MTV shows and other big festivals. In 2011 he started a drumming YouTube channel called The DrumBrother that then changed to The DrumHouse for copyrights reasons. With this project, he got the chance to collaborate with some of the best musicians from all over the world, including Steve Gadd (Eric Clapton, Joe Cocker, James Taylor), Thomas Lang (Robbie Williams, Paul Gilbert), Derek Roddy (Hate Eternal, Nile), Marco Minnemann (Joe Satriani, Paul Gilbert), Joey Jordison (Slipknot), Peter Erskine (University of Southern California), Devon Taylor (Justin Bieber, Rita Ora), Roy Mayorga (Stone Sour, Soulfly) and many others. In the same year, he joined the Pop Punk band Notimefor with which he toured Russia, Italy, Europe, and the UK several times.

In 2012 he returned to the metal scene and joined Hour of Penance, going back to be a full-time touring drummer playing over 150 shows per year on all the continents around the world. 2012 is also the year when Nuclear Blast released Hiss from the Moat's debut album, written entirely by James. In the same year, he also collaborated with Laserblast!, an organization of DJs where James played drums live over DJ sets. In 2013 he confirmed his position as one of the most important names in the metal drumming community and on his drum company sponsors rosters, and releases a series of videos for Nuclear Blast, Sickdrummer, Vic Firth, Zildjian, Tama, and many more. Each video received hundreds of thousands of views. He also did the “Iron Cobra Clinic Tour” in Italy, performing over 10 clinics all over the nation representing the new Tama Iron Cobra drum pedal. In 2014 he released his first instructional DVD "The Secrets of Extreme Metal Drumming" that sold out in less than one month. To promote the release of the DVD, he conducted a tour of 13 clinics with Francesco Paoli from the band Fleshgod Apocalypse (Nuclear Blast records) all over Italy.

In 2015 James received a called from the historical metal band Vital Remains and moved to the United States to join them. He then toured South America with them, played in Mexico at the Force Full Metal Fest, toured the USA twice as a headliner and once as main support for Hate Eternal and Europe, once as headliner, and once as main support to Belphegor. James wrote and pre-recorded the new album with former band member Tony Lazaro.

In 2016 he moved to Los Angeles and had access to the YouTube Space Studios, in which he started filming and producing several videos. He then parted ways with Vital Remains to fully focus on his band Hiss From The Moat and to release his instructional website jamespaynedrums.com with which he collaborates with magazines such as DRUM! Magazine, Drum Talk TV, and Sickdrummer. From 2016 to 2020 James played several tours in Asia, Europe, and Eastern Europe with his band Hiss From The Moat, but most of his time is dedicated to the great success of his instructional website JamesPayneDrums.com and his social media presence. He gains thousands of followers, subscribers, and views on all the most popular platforms on the web, and that becomes the biggest part of his career. In 2021 James joins the iconic band Kataklysm to return to being a full-time touring drummer while also maintaining his ever-growing online presence. James endorses Tama drums, Zildjian cymbals, Vic Firth drumsticks, Remo drumheads, Footblaster triggers, Lewitt microphones, and ADV Sound in-ear monitors.