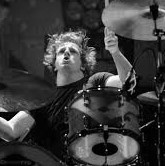 Jarrod Alexander is an American drummer who has played with many hardcore punk bands. Alexander has been the drummer for the bands The Suicide File, A Static Lullaby, Dead Country, Throwdown, and more recently, My Chemical Romance and Matt Skiba & The Sekrets.

Alexander has played the drums for several bands throughout his career. He was the original drummer for Death By Stereo, who appeared on the band's first album If Looks Could Kill, I'd Watch You Die. He left the band in 2000, but rejoined it in 2006 to record a new album.

He played the drums on the Background Music album from American Nightmare. He toured Europe drumming for the Vandals in 2001 before touring with Jamison Parker in 2004. Alexander played the drums on Hunter Revenge's 2007 tour as well as performing with Only Crime in 2007.

He played session drums for the band Throwdown on the albums Haymaker, Deathless, and Intolerance. As of 2014, he is the current live drummer for Throwdown as well.

In September 2011, Jarrod filled in as the drummer for My Chemical Romance on their "Honda Civic tour".  Alexander has continued to play with My Chemical Romance into 2012 including their appearances on the Australian Big Day Out tour dates and their final show at Bamboozle Festival. He's also contributed to Gerard Way, Ray Toro and Frank Iero's respective solo projects, after the break-up of My Chemical Romance.

In 2019, My Chemical Romance announced their reunion, with Jarrod returning for drums.  He was slated to tour with the band in 2020, however, the shows were postponed due to the COVID-19 Pandemic.