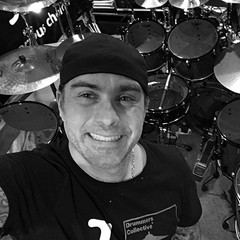 Jason Bittner, started taking formal drum lessons at the age of ten years old, however he had been banging on pots, pans, and garbage cans since he was about five. A native of Albany, NY, he continued to take lessons and perform in his middle school and high school jazz and orchestra ensembles before heading off to the prestigious Berklee College of Music in 1988. After studying theory, arranging, and Latin and jazz drumming styles, he left Berklee to pursue his musical career outside the educational environment. This led to playing in various metal and hard rock bands throughout the late eighties and early nineties. During this period he was also attending a local community college (for an unrelated degree) and performing with their jazz and percussion ensembles. In 1994 he joined Stigmata, who was, at the time, one of the biggest hardcore bands on the New York scene. Over the course of the next 7 years, he recorded 3 albums, released a home video, and toured the U.S. and Europe with this outfit. After being together for over a decade, the band decided to call it a day in 2001. As luck would have it, it would be the fall of 2001 when Bittner joined Century Media recording artists Shadows Fall. Initially he signed on just to do one tour of Europe with the band, but considering that fact that the band had so much going for them, and the chemistry between the 5 members was so great, he decided to quit his job and stay a permanent member. In September of 2002 the band released "The Art of Balance" and went on to tour relentlessly all over the US, Japan and Europe from venues ranging from small clubs to the stage of OZZFEST 2003. It was also during this time period when Bittner won his first Modern Drummer Reader's poll for #1 Up and Coming Drummer of 2004. September of 2004 brought the release of the album "The War Within", which debuted at #38 on the Billboard charts. Over the next year, the band once again toured all over the world, including arena tours with Slipknot, and a main stage spot on OZZFEST 2005. At this time, TWW has scanned over a quarter million copies, and has also received a Grammy nomination for Best Metal Performance. This record was also powerful enough to help Bittner win again in the 2005 MD readers'poll, this time for #1 Best Recorded Performance, and #1 Metal drummer. Over the course of 2005, Bittner started establishing himself as a clinician as well. He performed at the Modern Drummer Festival in May of 2005 to a standing ovation. In September, he performed at the DRUMMER live festival in the UK, followed by a clinic tour of Germany, and he also performed at PASIC in November of 2005. November of 2005 also brought the release of Shadows Fall's first ever DVD, "The Art of Touring" which Bittner helped film and produce. In 2006 Bittner was a very busy man. In the first three months he played fill in gigs for Anthrax, Hudson Music released a joint DVD with him and Chris Adler, Pro-Mark introduced the Jason Bittner Signature model 5BX drumstick, and Meinl introduced the Bell Blast ride, designed in conjunction with Jason. He was the cover feature of the UK drum publications, DRUMMER and Rhythm, and the cover feature of DRUM! In July. He was also one of the handful of lucky drummers who got to participate on Magna Carta's Drum Nation 3 record. Jason also won the Modern Drummer Reader's poll for the second year in a row for 2006 #1 Metal drummer. As for Shadows Fall, 2006 was also very productive year. The band released "Fallout From the War" on Century Media Records. Signed a Major Label Deal with Atlantic. Records. Toured throughout July and August in support of "Fallout", and spent the remainder of the year writing and recording "Threads of Life" at Studio 606 in L.A. with Producer Nick Raskulinecz (Foo Fighters, RUSH). So far 2007 has been just as busy for Bittner and Shadows Fall. In the early Winter months, Jason spent much of his time writing and recording new material for his side project, "Burning Human". He also released a new book called "Drumming Out of The Shadows", authored by Joe Bergamini, available through Carl Fischer Publications. From March through May, Shadows Fall toured in support of Stone Sour on the Jagermeister Music Tour. "Threads of Life" was released by Atlantic Records on April 3rd, and the band signed an International Label deal with Road Runner records to distribute the new release overseas. In May, Jason was the cover feature of Modern Drummer magazine, and then went on to take the #2 Metal drummer and #5 Educational DVD positions in their 2007 reader's poll. On June 9th, Shadows Fall rocked the Main Stage at the massive Download Festival, In Donningon, UK. From July through August, Shadows Fall will be featured on The Sounds of the Underground tour alongside GWAR, Chimaira, Job For A Cowboy, and Every Time I Die. In other international news, Bittner has signed on to write a monthly drum column for RYTHYM magazine in the UK starting in August. And lastly, he has been selected to be a faculty member at the Drum Fantasy Camp to be held at Seton Hall University, August 17th - 21st, alongside Steve Smith, Dave Weckl, and Horacio Hernandez.