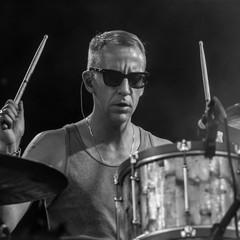 Jeremiah Green is an American musician best known as a founding member and drummer of the indie rock band Modest Mouse from 1993 to March 2003, and again from July 2004 to present.

He was born in Oahu, Hawaii, while his father was in the Army. He grew up in Moxee, Washington, a few miles outside of Yakima. His family moved to the Seattle area in 1989. He has an older brother named Adam, a half sister named Theresa, and a stepsister. He is married to Lauren Green, and their son Wilder was born in 2016.

In the mid-1990s, Green also played with the bands Satisfact on K Records, Red Stars Theory on Touch and Go Records, and Peeved on Distressed Records. Green also plays with a band by the name of Vells, as well as another band named Psychic Emperor. Both bands play at venues around Seattle and the Pacific Northwest.

Green can speak a little Japanese, as shown on track 6 of Night on the Sun.

In 2007, Green appeared on Graig Markel's "Via Novella" on the Sonic Boom Label.

In May 2008, Green released a drum breaks 7" collaboration with Plastiq Phantom under the alias World Gang on the Imputor? label.