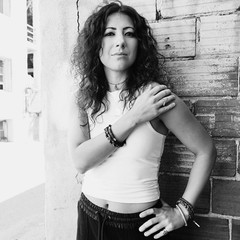 Jess Bowen is best known at the drummer of The Summer Set, a pop-rock band she co-founded as a teen in Arizona in 2007. Having garnered a local following with their early work, the band was signed to their first record label as soon as the members graduated from high school, and they went on to gain a large international fan base throughout the rest of the ten years they played together. The Summer Set has several well-received albums under their belt, and have toured all around the world, including performances in the Macy’s Thanksgiving Day Parade, iHeart Radio Music Festival, Soundwave Music Festival, Slam Dunk Festival, several summer’s on Warped Tour, and more. They have had multiple songs featured on radio and a variety of television shows on ABC and MTV.

Since 2017, Jess has continued as a touring drummer and played with artists such as 3OH!3, Alice Glass, Tessa Violet, The Ready Set, Dia Frampton, Thomas Ian Nicholas, The Matchstick Skeletons, and many others. She has also been featured in a national Pepsi commercial as the drummer for Charli XCX. Jess has been featured in magazines such as Alternative Press, Drum!, Modern Drummer, Tom Tom Magazine, and more. She was also nominated for “Best Drummer” at the 2014 Alternative Press Awards. She is known to audiences around the world for the energy she brings to the stage and the life her drumming infuses into the music.

Jess grew up in a drum-playing family following in the footsteps of her dad and older brother. Her major influences include drummers such as Travis Barker, Dave Grohl, and Sheila E. She is endorsed by DW Drums, Sabian Cymbals, Vater Drum Sticks, & Remo Percussion. When she’s not drumming, you can check out her radio show/podcast “Babes Behind the Beats” on Idobi Radio interviewing fellow ladies in the music industry.

"I grew up in a drum-playing family, and from as young as I can remember we always used Remo Heads. They are by far the best sounding, most durable heads I’ve ever used and I’m proud to be part of the family."  -Jess Bowen