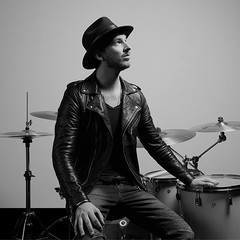 Jimmy van den Nieuwenhuizen (Oosterhout, the Netherlands, 1985) has been working in the music industry for 12+ years and is now known as one of the top talented drummers of the Netherlands.

Not only is he in the bands of VanVelzen and Soundwise with bandleader Eric van Tijn, Jimmy also performs as a session musician for several well-known and up-and-coming artists, live events (De Vrienden van Amstel LIVE!, Holland Zingt Hazes, Let’s Dance) and television shows (It Takes 2, The Passion). He is a regular guest in the Dutch studio scene and records with artists such as Wulf and Dinand Woesthoff.

Jimmy is also band leader for the Tribe Company, he has experience as a drum coach and has given workshops and clinics all over the country. In addition, he’s proudly endorsed by several well-known brands such as Yamaha Drums, Zildjian Cymbals, Remo Drumheads, and Agner Drumsticks.

In 2015 he was recognized as the best rock drummer within the Benelux by readers of the Slagwerkkrant - The Percussion Newspaper - and in 2018 he was voted #1 as "Drummer's Drummer Benelux".

There seems to be something in the water in Brabant – NL – when it comes to rhythm. Along with other well-known drummers, Jimmy also grew up in what is now known as the drum-capital of the Netherlands: Oosterhout. When he was a young boy, there was only one thing that mattered to him: playing those drums. At the young age of 7, he was allowed to take lessons with percussion master, Toon Oomen. The man who taught all the top drummers everything they needed to know.

10 Years in a Nutshell

In his third year studying at the Rock Academy in Tillburg (2006), Jimmy decided to take a chance on making this is his profession. His band R.O.O.O.M., a Dutch hip hop formation based in a bar, scored a record deal with EMI and was soon making appearances on huge stages and events such as the TMF Awards, the Malieveld and the Heineken Music Hall. After 4 successful years, Jimmy decided to part ways with the band to broaden his musical work experience.

In the following years, Jimmy worked for Spec Entertainment, a record label from Dutch superstar Ali B., where he toured with artists such as Yes-R, Sjaak and Ali B., himself. After the hip hop scene, Jimmy finds himself in the event circuit with famous band leader Stephan Geusebroek, and performed at huge events with artists such as Alain Clark, Belle Pérez, Jeroen van der Boom and Xander de Buisonjé. He also toured with Idols 4 winner, Nikki Kerkhof, and performed with the band Rigby for 1 ½ years as well as traveling to the United States to record several albums.

Since 2010, Jimmy has been the consistent drummer in the band from no1. selling artist and “The Voice-coach” Roel van Velzen. With this musical group, he writes, tours and performs in well-known theaters and stages, events and festivals throughout the Netherlands. His recorded music is evident on the albums “Call it Luck” and “The Rush of Life”.

With VanVelzen, Jimmy has toured four times throughout the country with the shows Hear Me Out, Rush of Life, Call it Luck, Queen; and A Night at the Theatre with Leo Blokhuis & Roel van Velzen.

Since 2013, Jimmy has been a band member of the Soundwise band, with Eric van Tijn as band leader, where he has performed on many diverse (television) productions and other big events. The group can be seen on several programs such as It Takes 2 and Lekker Nederlands, but also at events such as The Passion and Holland Zingt Hazes.

With 10 years of experience, Jimmy has been consistently approached for projects as a session musician. As a session musician, he got the chance to record tracks from artists such as André van Duin, Dinand Woesthoff, Gerard Joling, Jeroen van der Boom, Jim Bakkum, Mainstreet and Wulf. He is a regular guest at Soundwise Studio’s and Audioworkx, and has also work at other studios such as Blackbird (USA), ICP (BE), Eastcote (UK) and Wisseloord Studio’s (NL).