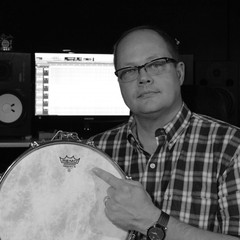 John Emrich is nationally recognized as a percussion instrumentalist, clinician, and developer with over 30 years of experience. Growing up in Chicago, John was a member of the Civic Orchestra of Chicago and many regional big bands, jazz groups and rock bands. In 1986, John earned a position with the United States Navy Music Program. He served as a featured member of the U.S. Navy Band, Washington D.C., where he performed as a drum set instrumentalist and concert percussionist, retiring in 2006 as a Chief Musician. John has performed throughout the world, including events for Presidents Reagan, GHW Bush, Clinton, GW Bush, Pope John Paul II, royalty, and visiting heads of state.

John is a driving force in the electronic drumming community as a premier producer, educator and consultant. He has taught at numerous clinics including major universities, recording arts schools and the Percussive Arts Society International Convention. John’s sample libraries and MIDI collections have received worldwide critical acclaim. He is a contributing writer for Modern Drummer Magazine and continues to be an advocate for the advance of electronic percussion.

Throughout his career, John has always used Remo drum heads. He has recorded every major brand of drum including a massive collection of vintage instruments. “Over the last 44 years of playing and recording drums, Remo drumheads are the only ones that make me truly feel as if I am getting the best out of my instruments. I have worked with other brands and they never measure up. I am Remo for life!”