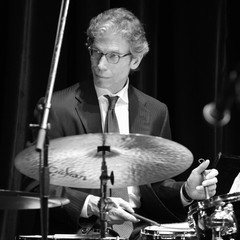 John began playing drums at age eight, after receiving a snare drum as a gift. With the support, encouragement and patience of his parents, John and Mary Ann, he played in the school band and began drum lessons with a good local teacher, Tom Sicola. While under Tom's guidance, he gained control of the snare drum through work on the rudiments and reading. Eventually, he acquired a complete drumset and lessons expanded to include "beats of the day," coordination and reading studies for the drumset. At age twelve, John began playing in rock bands and heard his first jazz recordings, the soundtrack to The Gene Krupa Story and Max Roach's Conversation. Two years later, he played his first "professional" gig, which he obtained through an audition played over the telephone. John began studying with Joe Morello in 1971, after meeting him at a drum symposium. John went on to attend the University of North Texas, where he was introduced to a larger world of music and percussion. While at UNT, he played in, toured, and recorded with the famed One O'clock Lab Band. In 1976, he moved to New York City and was soon called to join the Woody Herman Band. Following that great experience, John returned to New York and began freelancing with a wide spectrum of world class musicians, including Stan Getz, Milt Jackson, Miles Davis, Dizzy Gillespie, John Scofield, Bob Mintzer, Gary Peacock, Mike Stern, Joe Lovano, the Vanguard Jazz Orchestra, the Carnegie Hall Jazz Band, John Patitucci, Bob Berg, and many others. John has a Bachelor of Music degree in jazz education from the University of North Texas and a Master of Music in jazz studies from Manhattan School of Music. He is on the faculty of Manhattan School of Music, and SUNY Purchase, and is an Artist in Residence at Amsterdam Conservatory, Holland. John is also the author of The Art of Bop Drumming, Beyond Bop Drumming, The Jazz Drummer's Workshop, and has taught master classes around the world.

Regarding drumheads, here is what John wrote on his website: "When I was a kid, calf heads were more popular than they are today and some of the drums I played in school bands and orchestras had calf heads. I didn't see any calf heads on the drums used in the marching band. Growing up in New Jersey I played in all kinds of weather during the fall and winter marching season; calf heads were too particular to be depended on and, perhaps not durable enough to withstand the punishment we doled out with our 3S sticks. On the parade drums were Remo Weather King drumheads; they sounded great and were practically indestructible.

My first drumset had Remo heads, too. I’ve always been curious about the sound and feel of different types of drumheads and, through the years, I’ve tried just about every head available. For me, Remo heads are the universal choice. They can be tuned across a wide spectrum and always sound clear and true. There are models for everyone; heavy hitters, jazzers and orchestral players.

On my small group kit I like Coated Ambassadors on the top and clear on the bottom. On the bass drum I have a Pinstripe on the batter side and a PowerStroke3 on the resonant side and no muffling in the drum. On my bigger bass drum I like FiberSkyn3 PowerStrokes on both sides and no muffling. On my Silver sparkle kit at the Vanguard I'm going for a slightly different sound and find the FiberSkyn3 Diplomat weight heads are the ticket on the snare and toms and the same Fiberskyn 3 PowerStroke on the bass drum. Remo is constantly coming up with new sounds for the drums and I'm always looking forward to checking them out.