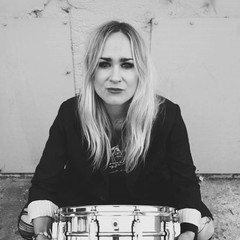 Josephine Forsman (born 20 May 1981 in Robertsfors) is a Swedish drummer/songwriter. She is one of the four founders of the rock band Sahara Hotnights. She started playing drums at the age of 10, and was a touring drummer at 15, gaining fans all over the world earning her gold records and Grammy nominations.

She is also the drummer of the hard rock band Casablanca, and has played behind Swedish artists like Robyn, Orup, Per Gessle.

In 2012 she hosted the music series “Songs that changed music" where she interviewed and played drums/guitar with performers like Clyde Stubblefield, Tommy Ramone, Michelle Phillips.

In 2017 she produced and hosted the music radio show “P4 ROCK”, she’s currently a music instructor at Loud Program, Los Angeles, writing music and doing session work and marketing. Latest big performance in October - 17 as the drummer on the marketing team for NIKE at global brand conference on the Nike Campus for elite execs, Michael Jordan, and private show for Beyonce.

She is the Director of the LOUD Program, Sweden.