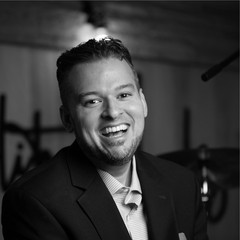 Born and raised in Perth Amboy, NJ, Juan “Carlito” Mendoza has been studying and performing for the past 25 years. The classically trained musician (marimba, timpani, orchestral snare drum, vibraphone, drum set and hand percussion) received his BA in Music Education in 2004 (New Jersey City University) and his MA in Music Education in 2013 (summa cum laude). In a quest to further his musical knowledge, Juan Carlos has also had the privilege to study under Nicholas Cerrato (Timpanist for the Tony Award Winning Broadway show Cats), Greg Giannascoli marimba virtuoso and percussionist of the Philadelphia Pops Orchestra and Brazilian Master Guillerme Franco. From a very tender age, Juan has been competing and establishing himself as a talented musician. At the age of 13, he competed and won Best Soloist in a national blossom festival Maid of the Mist competition held in Niagara Falls, Canada.

Juan has also competed as part of various drum corps. In 1997 and again from 1999- 2001, he participated with the world re-known Hawthorne Caballeros Drum and Bugle Corps from Hawthorne, NJ. In 2002, he marched with the Syracuse Brigadiers where they won the Drum Corps Association World Championship and won best percussion. Also in 2002, he competed and became the Drum Corps Association Snare Drum Champion where he beat 35 other snare drummers from across the nation. In addition, Juan has been featured in Pat Petrillo's New DVD Learning to Read Rhythms by Alfred music where he performed and recorded all the musical examples and was featured soloist.

Finally, Juan Carlos competed at the 2012 Guitar Center Drum Off where he beat over 5,000 drummers around the nation to become the 2012 Guitar Center Drum Off Grand Champion and most recently has been featured on Drumeo while providing quality content for their site and the drumming community. Juan is an adjunct professor at the New Jersey City University, currently runs a drum educational website, where he offers an array of pre recorded video drum lessons on various topics ranging from technique to different musical styles and is also a middle school band director. His drum method book Rudiment Creativity Vol. 1: Rolls and Paradiddle Rudiments demonstrates how to apply rudiments in creative ways around the drum set and inspire . Finally, Juan is currently working on his new method book Rudiment Creativity Vol.2: Flams and Drags, which should be out by the end of year.