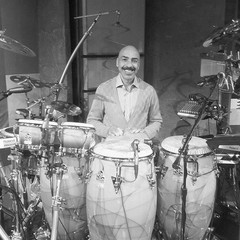 For percussionist, Kevin Ricard, versatility and musicality are the most important things he brings to each recording or performance. Whether it's the Brazilian groove of Sergio Mendes, the smooth Latin Jazz of Herb Alpert, or rockin' with legends like Steve Winwood and Kenny Loggins, Kevin shows he can move smoothly between diverse styles. "I love the challenge and the excitement of switching gears between different musical situations." He brings a sense of groove to the Rock, Jazz, Pop and R&B sounds, and adds authenticity to the Afro-Caribbean and Brazilian styles.

Recently, Kevin has been busy adding his unique talents to new releases by Gerald Albright, Everett Harp, Shelby Lynne, Van Hunt, Yolanda Adams, and Norman Brown. In January of this year, he joined the house band for the Fourth Annual "BET Celebration of Gospel", and in February he played on the pre-record for Beyonce's Grammy Award performance of "Dangerously in Love".

"Get Shorty", and he joined the house band for Clive Davis's annual pre-Grammy party. His busy schedule has also included a recent appearance on the Tonight Show with Shelby Lynne, joining the house orchestra for "The TV Land Awards", and a trip to London accompanying vocalist, Rhian Benson, for whom he is Musical Director, who performed on MTV Europe's "Bass Lounge". Kevin also just wrapped his fourth season of recording the underscore for the hit CBS sitcom "King of Queens".

Kevin's newest gig is with Fox's "American Idol". He has just started his first season doing the weekly pre-record for the popular reality series. In April, Kevin will be part of the house band for the annual "VH-1 Divas Live" show at the MGM Grand in Las Vegas, which airs on April 18, 2004. He will be performing with Patti Labelle, Gladys Knight, Joss Stone, Cyndi Lauper, Jessica Simpson and Ashanti.