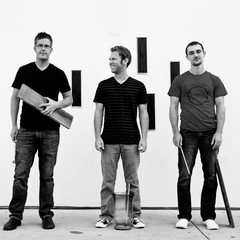 line upon line percussion seeks new ways for percussion instruments to advance contemporary art music by performing newly commissioned works alongside existent masterpieces, for adventurous and curious listeners. To date, the Austin-based trio has commissioned and premiered thirteen new works, four of which appear on their full-length, self-titled album. The group’s in-house creative project, seeing times are not hidden, won top prize at the 2011 Music in Architecture-Architecture in Music Symposium at the University of Texas at Austin. The work involves over 1000 glass, metal and hardwood chimes suspended from the three arches of Waller Creek Bridge. In April 2013, line upon line gave the North American premiere of Hugues Dufourt’s massive evening-length masterpiece, Erewhon, which enlists the use of nearly 150 percussion instruments. The group’s self-presented concert series, now in its third year, was recently listed as one of the Top 10 Dance/Classical Music Treasures of 2014 by the Austin Chronicle. Its 2015-2016 opener, soft, received an honorable mention in the most recent version of the award.

In 2013 and 2014, the trio was named "Best Ensemble" by the Austin Critics' Table and is currently a member of the Texas Commission on the Arts Touring Roster. The Austinist called line upon line “the premier new music percussion ensemble in Texas and the South” and the Austin American-Statesman considers the group “a riveting, always-surprising and delightful trio.”

line upon line percussion has performed and given educational clinics at colleges and universities in twenty-one different states, in addition to maintaining educational and outreach roles with the Austin Chamber Music Center. In March 2014, the group’s first international tour included six different engagements throughout England, Switzerland and Germany. line upon line has given an afternoon showcase at the Percussive Arts Society International Convention and performed at some of the most well-known festivals in Texas including Fusebox, SXSW, Fast Forward Austin, the Victoria Bach Festival and the International Festival-Institute at Round Top.