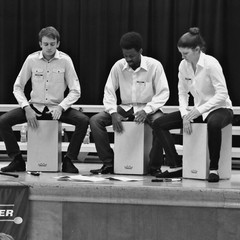 Lineage Percussion, coached by Timothy Adams Jr. and Ms. Kimberly Toscano, was founded in 2014 by Trevor Barroero, Lauren Floyd, and Wesley Sumpter in the Hugh Hodgson School of Music at the University of Georgia.

In 2016, Lineage Percussion was a bronze medalist in the Fischoff National Chamber Music Competition becoming the first percussion group in the 43-year history of the competition to be a finalist in the senior division. Before this, the trio was a semifinalist of both the Coltman Chamber Competition and the 2015 Fischoff Competition, and was a third-place winner at the Percussive Arts Society’s Chamber Competition. Passionate about supporting new works by contemporary composers, Lineage Percussion has commissioned and premiered over a dozen new works for percussion trio. Endorsed as educational artists with Mike Balter Mallets and Remo Drumheads, they have presented clinics and performed recitals for elementary schools, high schools, retirement communities, and private organizations around the state of Georgia.

Deeply rooted in a rich history of orchestral percussion play, Lineage Percussion seeks to preserve and expand upon the traditions and style of percussion performance set forth by their teachers and their teacher’s teachers. This balance of innovation and duplication results in the trio’s distinctive sound. Whether they are playing marimbas, snare drums, bongos or household objects, their identical training results in a uniform approach to each and every percussion instrument. For more information about Lineage Percussion visit: www.lineagepercussion.com

Trevor Barroero, gold medalist of more than a half dozen concerto competitions, most recently won the Pacific Region International Summer Music Academy’s concerto competition, which resulted in an invitation to travel to Russia this upcoming winter to perform as guest timpanist/percussionist with the Moscow Symphony Orchestra. A native of Tucson, Arizona, Trevor has performed as a soloist with nearly every major orchestra in Southern Arizona including the Tucson Symphony Orchestra, the Tucson Pops, the Civic Orchestra of Tucson, the University of Arizona Symphony Orchestra, and the Tucson Philharmonia Youth Orchestra. Trevor has been a featured guest performer o n the T ucson Morning Blend television show and on the KXCI “Locals Only” radio broadcast. He was a selected participant of the Aspen Music Festival for two consecutive summers and has attended the Juilliard Summer Percussion Seminar, the Pacific Region International Summer Music Academy, the Vancouver Symphony Orchestra Institute. Trevor performs as substitute timpanist with the Tucson Symphony Orchestra and as substitute percussionist with the Southern Arizona Symphony Orchestra and the Sierra Vista Symphony. A Flinn Scholar, Trevor is currently completing his final year of undergraduate studies at the University of Arizona as he pursues a Bachelor of Music in Percussion Performance. For more information visit: www.trevorbarroero.com

Lauren Floyd is currently pursuing a Master of Music degree in percussion performance at the University of Maryland. Lauren has performed with the National Symphony Orchestra, performing as 2nd timpanist alongside Jauvon Gilliam on their benefit concert for the ADL. In 2015, Lauren was selected to participate in the Brevard Music Center's Summer Festival. She has served as principal percussionist of the UGA Wind Ensemble and UGA Symphony Orchestra and as principal timpanist of the Fountain Inn Symphony Orchestra. Lauren was the recipient of the Erica Stoffel-Murray Scholarship, a performance-based scholarship. She has performed with several chamber groups at the University of Georgia, including the UGA Percussion Ensemble, Steel Band, New Music Ensemble, and the Modular Ensemble. Lauren has also presented master classes at Dickerson Middle School and Walton High School in Marietta, Georgia.

Wesley Sumpter is finishing his last year of undergraduate studies in Percussion Performance at the University of Georgia. He has performed as substitute timpanist with the Atlanta Symphony Orchestra and was a semifinalist in the 2014 and 2015 Atlanta Modern Snare Drum Competition. He has performed as extra percussion with the Louisiana Philharmonic, Symphony Orchestra Augusta and the Albany Symphony in Georgia. Wesley has attended the Eastern Music Festival and Aspen Music Festival and School and he was a drummer on VH1’s feature film, Drumline 2: A New Beat. An avid drumset player, Wesley has performed as a studio drummer and freelancer throughout Athens and Atlanta, Georgia. He has played with artists such as Macy Gray and has performed as a member of various bands including Bridges (Folk/Rock) and Mister Tie Dye (Funk/Fusion). When in Atlanta, Wesley teaches at Benjamin E. Mays High School.