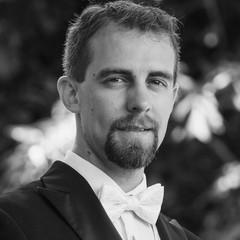 Originally from Albuquerque, New Mexico, Lucas Sanchez enjoys a multi-faceted career as a timpanist, percussionist, and teacher. Mr. Sanchez currently performs with the Palm Beach Symphony under the direction of Gerard Schwarz, the Florida Grand Opera, the Nu Deco Ensemble, and the Southwest Michigan Symphony Orchestra; in the past he has appeared with the Houston Symphony and the Amarillo Symphony.

Mr. Sanchez is as comfortable in front of the orchestra as he is behind it; he has appeared as a soloist with the Texas Music Festival Orchestra, the Frost Symphony Orchestra, the Shepherd Percussion Ensemble, and the Albuquerque Youth Symphony. In 2018, Lucas was awarded first place in the Frost Concerto Competition with Johann Carl Christian Fischer’s Symphony with 8 Obbligato Timpani.

As an educator, Mr. Sanchez maintains a private percussion studio in Miramar, Florida. He is an instructor for the Greater Miami Youth Symphony program and gives masterclasses at high schools and colleges in South Florida. After playing timpani with the Blue Knights Drum and Bugle Corps in 2014, Lucas has enjoyed teaching the modern marching arts at local high schools.

Mr. Sanchez is an advocate of new music, premiering new solo, chamber, and orchestral works every year. He has worked with composers Augusta Read Thomas on qì and Selene, and Andy Akiho on Pillar IV.

Lucas began his studies in Albuquerque with Douglas Cardwell. He received his Bachelor and Master of Music degrees from Rice University under the tutelage of Richard Brown and Matthew Strauss, where he was awarded the 2016 Sallie Shepherd Prize for Best Achievement in Music.

Mr. Sanchez is an alumnus of the Aspen Music Festival and the Texas Music Festival, and was awarded full-tuition fellowships at both for 3 summers each. At these festivals, Lucas performed in masterclasses for Ed Stephan, David Herbert, Markus Rhoten, Joseph Pereira, Ted Atkatz, Paul Yancich, Mark Yancich, Jonathan Haas, and Jauvon Gilliam.

Lucas is currently writing his dissertation for a Doctor of Musical Arts degree from the University of Miami, studying with Matthew Strauss and Svetoslav Stoyanov.