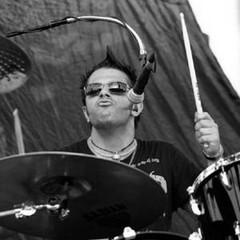 Mac Calvaresi has been the drummer for EMI/Caroline recording artists Cinder Road, since the band’s creation in 1995. Originally named “Plunge”, the band extensively toured the east coast cover scene, playing no fewer than 250 shows a year, while still in high school. Mac’s musical aspirations also afforded him the opportunity to travel overseas as a member of the American Music Abroad program, in which he played the cello as the only stringed instrument in a symphonic band setting. After studying percussion with John Locke, principal percussionist for the Baltimore Symphony Orchestra, Mac acquired a full music scholarship to Towson University in Towson Maryland. Here, he began studying under the direction of Dale Rauschenberg and Michelle Humphries, both of whom have been members of the Baltimore Opera Company and presidents of the Maryland Chapter of the Percussive Arts Society. Mac’s love of marching percussion led him to the center snare position of the Baltimore Marching Raven’s band, while his fondness of orchestral percussion took him to the Greater Baltimore Youth Orchestra under direction of Jason Love.

In 2004, Plunge (Cinder Road) was selected from thousands of applying bands to be a part of the Armed Forces Entertainment Network. As a result, the band traveled to multiple countries and such remote locales as Greenland, Okinawa, and Guam as musical ambassadors of the United States, performing for the American military forces stationed around the globe.

The group’s hard work and dedication at such a young age paid off, when Plunge caught the attention of Union Entertainment Group, the management team behind multi-platinum Canadian band, Nickelback. Cinder Road soon found themselves in the studio with veteran producer Marti Frederiksen (Aerosmith, Def Leppard, Ozzy Ozbourne) and the debut album, SUPERHUMAN, was born. The CD is a mix of high-octane rock songs and heartfelt ballads which, according to singer Mike Ruocco, “create an experience, running the gamut of emotions.”

In January 2007, Cinder Road won the admiration of Chris Daughtry and his management team, thereby earning them the direct support position on Daughtry’s national tour. For the next five months they played sold out shows across the country. The reviews were excellent and the band’s fan base grew by leaps and bounds.

After Daughtry, Cinder Road continued to tour with bands such as Candlebox, Alice Cooper, Tesla, Hurt, Red, The Sick Puppies and eventually KISS, on their Alive 35 Tour of Europe. That tour took the band through over 20 countries and most of the European continent, and staged Cinder Road in front of hundreds of thousands of rock fans, worldwide.

Upon returning home, Mac revisited his teaching career and now lives in Baltimore, Maryland where he teaches percussion and strings to middle school musicians.