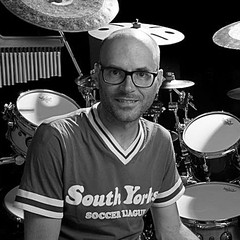 Marco was born on 4 September 1974 in Zurich, Switzerland. He started playing drums at the age of 15 with his drum teacher: Lello Fazio, Bruno Rizza and Lele Melotti. Marco’s didactic education is enriche with many refresher courses given by famous drummers (Virgil Donati, Mike Portnoy, Vinnie Colaiuta, Dave Weckl, Dennis Chambers, Tony Royster Jr, Lele Melotti, Marco Minneman, Simon Phillips, Jojo Mayer ecc..). At the same time, Marco playied with various cover bands, drumming rock, pop and blues. In 1997, He starts to develop a new pedal technique by himself, which he continues to update even today. From 2000 to 2006, He starts teaching teenagers to play the drums in S.Giorgio a Liri (FR) - Italy. In 2002, after having gratuated in Economics, Marco decides to dedicate all his time playing the drums. In 2003, He wins the national competition “Tempi moderni” advertised in the magazine “Percussioni”, by recording the DVD of the “Drummers United” event. In 2004-2009 Marco theaches at Yamaha school “Progetto Musica”. In 2005 he wins the national competition “Perc Fest” and later the year, He becomes endorser of the UFIP cymbals. In 2006, He sarted teaching (and still teaches today) at Yamaha “Musica E’” school. In 2007, He record his first DVD entitled “10 PEDALS” Wheel he provides axplanations on all his techniques used. He later becomes endorser of Vic Firth sticks and X-Drum drums and harware. Between 2008 and 2010, He teaches at the music school “Note classiche”. In 2008, He becomes a member of Antonio Petronio’s folk orchestra “Volano i Mantici” and record an album entitled “In Viaggio”. He plays along with the orchestra in their 2009-2010 tour.

In 2009 Marco’s dream has finally come true. He receives appreciation and recognition from America for his personal research carried out on his drum set. After visioning Marco on You Tube, Terry Bozzio invites Marco to Los Angeles to take part in the programme “The Art of Drumming” which is broadcasted “Drum cannel”. Due to enormus success of Marco’s performance, Norbert Seamann (from Meinl Cymbals) offers Marco an international endorsement contract with Meinl cymbals. In 2010 Marco is asked to present his repertoire by partecipating in the international drum festival “Adams Drum World Festival 2010”, playng on the same stage as Steve Gadd. Currently, Marco promotes his drammig activity through sold out drum stage performance (Cassino, Roma, Caserta, Macerata, Firenze, Milano, Torino, Genova, Reggio Emilia, Treviso, Udine, Frosinone..). In 2013 Marco becomes endorser of Meinl percussions
In 2013 Marco come back in LA to play again with his mentor: Terry Bozzio. In Drum Channel he teaches his special foot technique with Don Lombardi and in the same year get the dw and PDP international endorsement. In the same year plays for Gewa Italy ( dw and PDP national dealer ) like clinician and performer.
In 2014 he records an official video for dw and PDP web site and builds the twin drum set for United States. In 2014 Marco becomes endorser of Remo Heads .