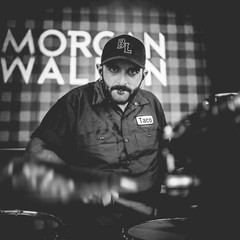 time as Morgan continues his rise in country music. Morgan received his first #1 on the country radio charts with the song “Up Down” (feat. Florida Georgia Line).  Other top songs include, "Whiskey Glasses", "Chasin You", "More Than My Hometown" and "7 Summers". Morgan's sophomore album titled, "Dangerous" released Jan. 8th 2021 and held the #1 spot for 10 weeks on Billboard. Taco started working with Morgan after relocating to Nashville, TN in 2015. Prior to the big move, he was drumming for a well established active rock band called "Atom Smash” Previously of (Jive Records). Atom Smash released their debut album “Love is in the Missile” in 2010. This sparked a full touring schedule promoting the records single “Do Her Wrong". When not on the road, Taco offers "for hire" services including drum tracking sessions both locally and remotely, as well as setting up live backing tracks for your next show or tour . He can be recognized for his hard hitting and energetic performance style, yet demonstrating versatility and consistent technique. His performance influences anywhere from John Bonham, Dave Grohl, Taylor Hawkins, Chad Smith to Buddy Rich and Dave Weckl.

"I love Remo and couldn't imagine playing anything else.  Construction, tone, and value; Remo drumheads allow any drum to perform at it's optimum state."  -Mark "Taco" Annino